One fine day while i was rummaging through the part bin, I found an old project that probably was never completed ! FM Radio ! I tried to make one when i was in 7th grade, waiting at the counter of a dingy electronics repair shop for anyone to pay attention to the parts list gathered over the internet ( Dial up days ! ).

At that time, i just jotted down all i could from the internet and went straight to the repair guy expecting some help. It never did work and i soon lost interest but it remained until recently when i was skimming ebay to get some stuff and i saw ‘TEA5767 FM Receiver’ module selling for 0.99 $ . Cheap is attractive specially in DIY world and the rest was involuntary . After 20 days the module was with me.

TEA5767 is a digital FM Receiver chip from NXP/Phillips that can be commanded over I2C to tune to various frequencies easily.

But alas ! The one i got never matched with any pictures online ! Where was the missing “crystal” responsible for all the PLL stuff? Where are all the other pins ? That was frustrating. Thanks to the cryptic words written on the silkscreen “TT-502X” i was able to find out that only one person except me happen to have posted about this and he apparently has documented it in a schematic! Thanks to Dilshan, an amazing maker himself, I was able to get this done.

It turns out that the module is actually used in some Samsung Products and requires a generic watch crystal.

The connections are similar to what Dilshan mentions it in his post. I added a diode (Reverse Polarity. Ouch!) and a decoupling cap. And after a bit of work with the solder iron i was able to make my own FM Receiver Module. 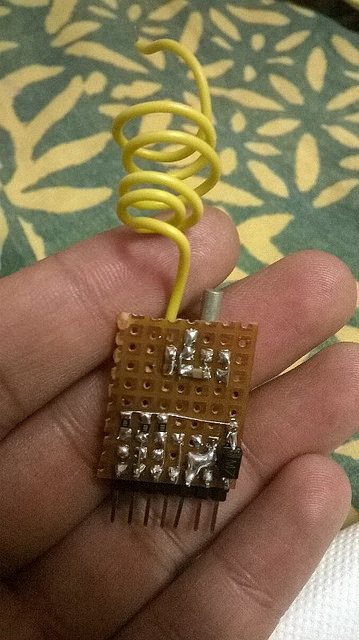