Michael Porter, fishery biologist with the U.S. Army Corps of Engineers, Albuquerque District, has been involved with Science Technology Engineering Math (STEM) events for years. Porter is always on the lookout for ways to make STEM timely and relevant for developing scientists. 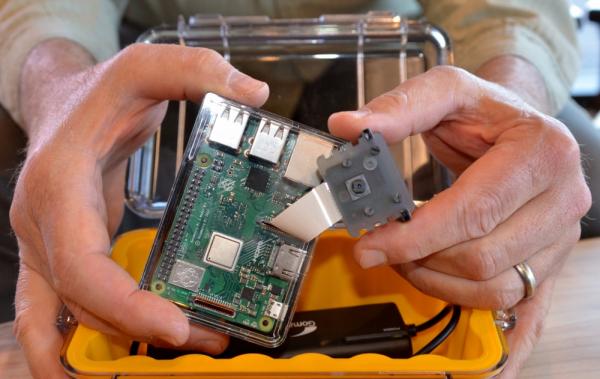 Earlier this year he discovered a huge opportunity for bringing STEM and students together: by utilizing very small, revolutionary computers, called Raspberry Pi, as platforms for underwater photography.

According to Wikipedia, Raspberry Pi computers are a series of small, single-board computers developed in the United Kingdom, by the Raspberry Pi Foundation. The purpose of these small, and very affordable, computers is to promote teaching of basic computer science, both in schools and in developing countries. These are a low-cost alternative, programmable computer platform, which are easily adaptable in a variety of situations. In Porter’s case, he saw the opportunity to adapt these small computers to fit his needs as under-water cameras.

The Bosque Ecosystem Monitoring Program (BEMP), which is run out of the University of New Mexico, is one of the most successful, on-going, STEM programs in Albuquerque, N.M. Porter, who has been involved with the BEMP program since its inception, contacted them, who put him in touch with Mary Fox, a science teacher at Mesa del Sol Middle School.

Fox jumped at the opportunity. She was able to obtain six to eight Raspberry Pi computers through the Civil Air Patrol; and she, and her sixth grade students, began learning the process working with these small, adaptive computers.

The objective was to utilize these computers’ cameras to take photos of small organisms, under water, and for the students to assist USACE in monitoring underwater organisms. The students performed all of their work in an aquarium at their school, located south of Albuquerque; it is too far for them to go to the Bosque to do their experiments.

The students presented their project at a poster presentation during the 52nd Joint Annual Meeting of the Arizona and New Mexico Chapters of the Wildlife Society and American Fisheries Society, Feb. 7-9, 2019. “I thought this would give the kids a good experience,” said Porter. In fact, everyone had a great experience. The poster was created entirely by Fox and the students. The youngest group to present, Fox and her students spent the evening discussing their experiences with other interested students, organizations, scholars and presenters. The poster describes the students’ first year efforts, of working with the Raspberry Pi computers.

Porter plans on continuing to work with these students, and Fox, during the 2019-2020 school year.

Source: FOCUS ON STEM: How about some Raspberry Pi?