One thing about microcontrollers that will always be respected, is their ability to consistently provide real-time processing, low power, low cost, and most importantly a lot of I/Os. They excel quite well in those aspects, and in some cases they are indisputable, but when we deal with security and user interface comes into play, this is usually out of the question and designers usually result to an application processor which provides extreme performance but might also have some drawbacks. 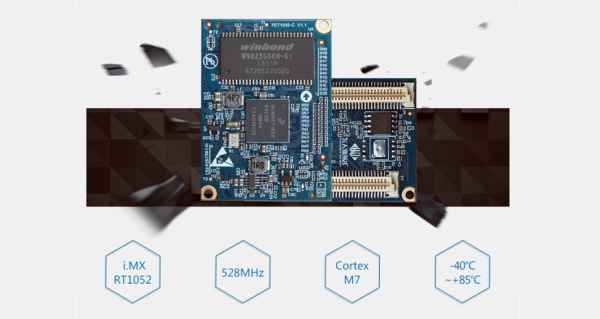 How do we bring the best of both worlds together? Bridge the gap between performance and usability? Well, NXP launched the i.MX RT Series Crossover Processor family. The i.MX RT Series is the industry’s first crossover processor, offering the highest performance Arm®Cortex®-M core, real-time functionality, and MCU usability at an affordable price. A  real-time response with latency as low as 20ns is what you get with these crossover processors.

The Forlinx Embedded OK1052-C board is a production-ready commercial solution that leverages the NXP i.MX RT series crossover processors. At the core of the Forlinx OK1052 is the NXP Cortex-M7 crossover processor i.MX RT1052 belonging to i.MX RT1050 series MCU. The i.MX RT1050 runs on the Arm®Cortex®-M7 core at 600 MHz with insane real-time response. The i.MX RT1052 processor has 512 KB on-chip RAM, which can be flexibly configured as TCM or general-purpose on-chip RAM. 16MB/ 32MB SDRAM, 4MB/ 16MB QSPI-NorFlash are optional.

Forlinx Embedded OK1052-C comes available as system-on-module and carrier board. They are both ready to be deployed in any terrain, capable of working in temperature ranges from -40℃ to +85℃ making in usable in the industry.

Set up your Arduino and Raspberry Pi to control lighting and animation on an RGB LED strip from your smartphone...