Description of this Free E-Book:

This book explores a number of things you can do with your Raspberry Pi, from controlling hardware with Python, to using it as a media centre, or building games in Scratch. The beauty of the Raspberry Pi is that it’s just a very tiny general-purpose computer (which may be a little slower than you’re used to for some desktop applications, but much better at some other stuff than a regular PC), so you can do anything you could do on a regular computer with it. In addition, the Raspberry Pi has powerful multimedia and 3D graphics capabilities, so it has the potential to be used as a games platform, and we very much hope to see people starting to write games for it.
We think physical computing—building systems using sensors, motors, lights and microcontrollers—is something that gets overlooked in favor of pure software projects in a lot of instances, and it’s a shame, because physical computing is massive fun. To the extent that there’s any children’s computing movement at the moment, it’s a physical computing movement. The LOGO turtles that represented physical computing when we were kids are now fighting robots, quad copters or parent-sensing bedroom doors, and we love it. However, the lack of General Purpose Input/output (GPIO) on home PCs is a real handicap for many
people getting started with robotics projects. The Raspberry Pi exposes GPIO so you can get to work straight away.
I keep being surprised by ideas the community comes up with which wouldn’t have crossed my mind in a thousand years: the Australian school meteor-tracking project; the Britton Scouts in the UK and their robot, which is controlled via an electroencephalography headset (the world’s first robot controlled by Scouting brain waves); the family who are building a robot vacuum cleaner. And I’m real space cadet, so reading about the people sending Raspberry Pies into near-earth orbit on rockets and balloons gives me Goosebumps.
Success for us would be another 1,000 people every year taking up Computer Science at the university level in the UK. That would not only be beneficial for the country, the software and hardware industries, and the economy; but it would be even more beneficial for every one of those 1,000 people, who, I hope, discover that there’s a whole world of possibilities and a great deal of fun to be had out there. Building a robot when you’re a kid can take you to places you never imagined—I know because it
happened to me! 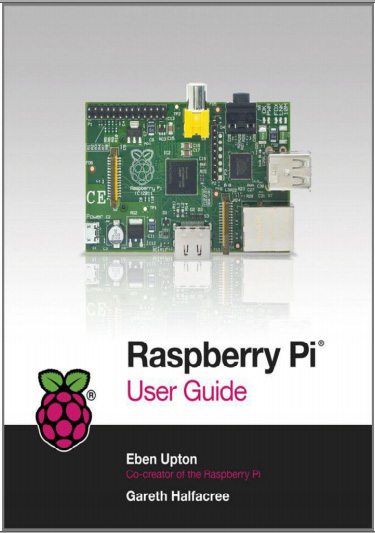 Eben Upton is a founder and trustee of the Raspberry Pi Foundation, and serves as its Executive Director. He is responsible for the overall software and hardware architecture of the Raspberry Pi, and for the Foundation’s relationships with its key suppliers and customers. In an earlier life, he founded two successful mobile games and middleware companies, Idea works 3d Ltd. And Pod fun Ltd., and held the post of Director of Studies for Computer Science at St John’s College, Cambridge. He holds a BA, a PhD and an MBA from the University of Cambridge.

A bit of history

So what can you do with the Raspberry Pi?

Part I: Connecting the Board

Getting Started with the Raspberry Pi

Connecting a Keyboard and Mouse

Moving to a Bigger SD Card

Chapter 7: The Pi as a Home Theatre PC

Playing Music at the Console

Chapter 8: The Pi as a Productivity Machine

Image Editing with The Gimp

Chapter 9: The Pi as a Web Server

Chapter  10: An Introduction to Scratch

Chapter  11: An Introduction to Python

Using the GPIO Port in Python

Moving Up From the Breadboard

A Brief Guide to Soldering

Raspberry Pi is Linux, but it's a unique flavor of Linux, specifically for the ARM-based Pi. Raspberry Pi Software Referenceguides...