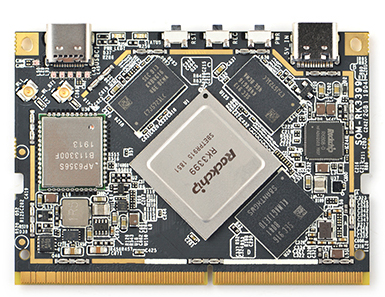 Last year, the company released a pair of open source SBCs built around the same chip, the NanoPi M4, also with the NanoPi Neo4, expected to take on the Raspberry Pi 3 with its less powerful Broadcom BCM2837 SoC. On the CPU board feature, the SOM-RK3399 can run as an independent SBC, and beyond the 64-bit hexa-core RK3399 with Mali-T864 GPU, the board is equipped with 2Gb of dual-channel DDR3 RAM, and 16Gb (32Gb/64Gb optional) of eMMC 5.1 Flash. Connectivity features include Gigabit Ethernet, 802.11a/b/g/n/ac Wi-Fi, Bluetooth 4.1 (dual mode), and a dual antenna interface. The SOM-RK3399 is fitted with a pair of USB Type-C ports, 2X USB 2.o ports, a single USB 3.0 host interface, HDMI 2.0a, Display Port (over USB Type-C), a 4-lane LCD eDP connector, and one or two 4-Lane MIPI-DSI.

Torex Semiconductor Ltd. has launched the XC6193/XC6194 as new series of Push Button. In recent years there have been strong...