Earlier this month, Google released Android Things 1.0 and announced many consumer products that will ship in the coming months based on the stripped-down, IoT-oriented Android variant. Google uncovered four ARM-based production boards for Android Things 1.0: Innocomm’s i.MX8M based on WB10-AT, Intrinsyc’s Open-Q 212A and Open-Q 624A, based on the Snapdragon 212 and 634, respectively, and the MediaTek MT8516. 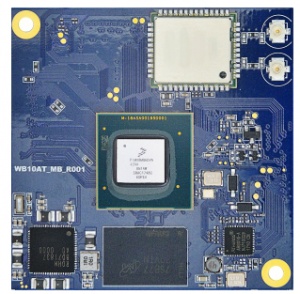 The most important news with the first market-ready release of Android Things is that Google is offering free OTA security and patch updates for three years to all targeted devices. However, Google needs a licensing deal to deploy more than 100 commercial systems using the OTA updated long-term version of Android Things, and the OS itself is “managed” and tightly controlled by Google.

The modules share the same small footprints of about a 50 x 50mm. They also focus on audio features that might support integration with the Google Assistant voice agent. The first round of consumer devices using Android Things are smart speakers and automation hubs that integrate Google Assistant.

Intrinsyc’s Open-Q 212A is a sandwich-style SBC designed for next-gen smart speaker and voice-controlled home hub products. There is a new 50 x 46.5mm Open-Q 212A Android Things SOM with a quad-core, Cortex-A7 Qualcomm Snapdragon 212 (SDA212) — the lowest-end SoC available for Android Things mounted on a 170 x 115mm carrier board.

Variscite a leading SOC manufacturer from Israel, has released a new version of its wireless-enabled “VAR-SOM-MX6” module. It adds support for...