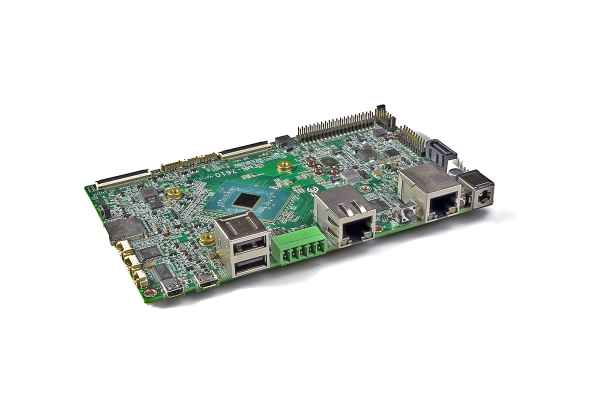 The fanless design is industrial rugged, and will operate in temperatures up to 140° F, up to 95% humidity. The board can be easily adapted to a variety of purposes with built in support for Windows 10, Windows 10 IoT, or Ubuntu Linux.

The EMB-7610 has been built around efficient Intel Celeron chips – available with either the Dual Core N3350 or Quad Core N3450. The chips natively support a wide variety of connectivity, and the EMB-7610 takes full advantage – featuring an RS-232/285 terminal block, an RS-232 header, two USB 2.0 Type A ports and four additional USB 2.0 headers, one MicroUSB 2.0 port, and four or more GPIO connections. Display connectivity via two I2C ports and an additional MIPI-CSI, and a powerful ALC662 Audio Codec supports up to 6W per audio channel.

24bit LVDS, eDP or MIPI, power, backlight controls, and touch panel interfaces for screens have all been located in a single FPC connector for easy developer integration with all types of industrial and touch panel PC applications. The Intel processor supports a MIPI-CSI input and MIPI-DSI output, integrated audio inputs and outputs, as well as up to 3 independent displays in sizes from 7” to 10.1” or more. An example of a panel PC built with the EMB-7610 board is already available from Estone Tech – the PPC-6710. Product designers and developers working on human speech and gestural interaction devices may find the board extremely beneficial.

Raspberry Pi enthusiasts searching for inspiration for their next project may be interested in this Raspberry Pi Sense HAT project...