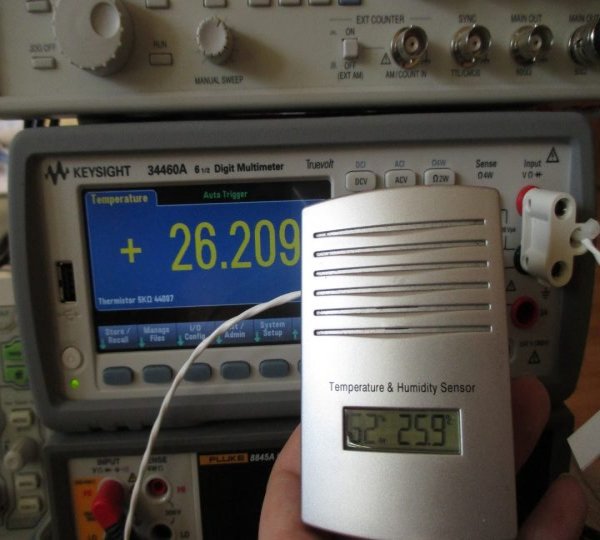 Recently I’ve found this piece of electronic on the dumpster, it was looking interesting – compact case with battery holder, LCD display, temperature and humidity sensor. It has also radio transmitter, but I’m not interested in it since I don’t have the receiver station. I decided to bring it back to life.It seems that was previously immersed in water – whole PCB was covered in white stains, in addition radio transmitter was covered in wax, that made removing of its components much harder. At first multimeter hasn’t shown shortcut of battery electrodes, but the device was drawing a lot of current, roughly 1A. I decided to clean it first using trisodium phosphate solution, then rework all of the joints with a lot of flux and clean it again. This fixed the problem of shortcut and the device started to work.

Unfortunately, while temperature readings were correlated with the environment, they were much too high. The temperature sensor is just a termistor, for those who want to see signals on its pins, below is a screen, as visible – current doesn’t flow through this element all the time, only, when a measurement is made. This will probably save some battery life. Nice.

I don’t know, why the measurements were incorrect, maybe the IC or the thermostat was damaged by the humidity, maybe [this is cheap Chinese consumer electronic] manufacturer run out of the correct thermistors and replaced them with new ones with different curve, or maybe those were cheaper than originals. I don’t know. I decided to try to hack the curve of a thermostat by using serial and parallel resistors.

The problem is that I don’t have thermal chamber, so I can’t easily draw thermistor curve before and after the fix. I could improvise, but for such gadget I don’t care. I’ve removed thermistor from the PCB, and soldered on its place electrodes, then I placed the thermistor on a breadboard, and tried different values of resistors. The room temperature was between 21-25°C – I could modify it by opening a window – maybe not the best way, but it works. My whole room had become a temperature chamber 🙂

Finally, I’ve added two resistors, as visible below. It works for room temperature, but for outdoor use it’s still not good. Anyway, I will leave it as it is, at least for the moment.

Who is at the coffee machine?

Have you ever wondered how facial recognition works? Have you heard of Sigfox? Do you like Raspberries? In this tutorial...