Yes, of course, building and tinkering with a DIY robot is fun. In this series, we will build a Raspberry Pi Rover Robot which can travel through rough terrain and control using hand gestures. 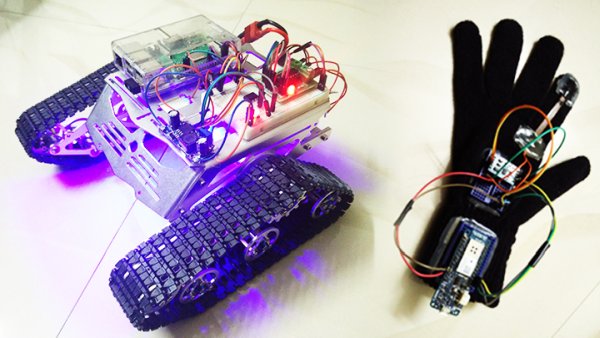 To drive this bot we will be using a control glove which acts as a gesture sensor. The gesture sensor will have an accelerometer and a flex sensor to control the status and the direction it should move. The flex sensor activates the Spinel Crux and the tilt of the accelerator determines the direction it should move. And yes, there is a robot building kit available for you to build one yourself.

Now just for a taste, watch the Demo Video of the Spinel Crux – The DIY Gesture Controlled Robot. In this demo video, we show you how you can control the robot using just hand gesture.

In this video series, we will explain everything about this gesture control robot, controlling it with the hand gesture using the gesture sensor control glove and will show you how to make one yourself.

We will provide you with the design, code of the gesture-controlled robot and links to all the products used in this project including the robot building kit.

How does this Gesture Controlled Robot Work?

We use a Raspberry Pi to make the Robot, which will receive the data sent from the Arduino, process them and control the bot.

We will now head over to the tutorial section and will start building it. For your convenience, I will be dividing this post into two parts. In the first part, I will show you how to make the controlling glove and in the second part, I will show you how to build this DIY robot.
Links to the robot building kit are also available in our project tutorial pages so that you can buy any robot building kit you want and build your own DIY robot as per your needs.

Making your first Circuit Board – Getting started with PCBway [Part 2]

This is the next part of  “MAKING YOUR FIRST PRINTED CIRCUIT BOARD – GETTING STARTED WITH PCBWAY [Part 1]“ Series....