Element14 has introduced a Hi-Fi add-on board for Raspberry Pi.

Developed with Wolfson, it is based around the audio company’s WM5102 audio hub chip which has a comprehensive set of analogue and digital audio inputs and outputs, and represents a huge quality increase over Raspberry Pi’s existing education-grade audio interfaces. 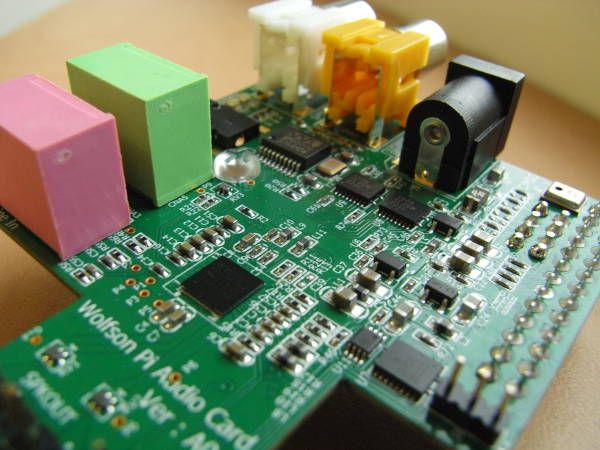 Exciting for audiophiles, this particular chip is capable of 113dB signal/noise (SNR) headphone playback (29mW into 32? load at 0.1% THD+N), and has high-quality line out (green connector in the photo) as well as a built-in Class-D amplifier for driving small local speakers (header pins).

For recording, is also has 96dB SNR microphone inputs, and the PCB includes built-in MEMS microphones.

The two phone plugs are digital (SPDIF) in (white) and out (orange).

The remaining socket is power-in.

For more basic audio – like VoIP work, there is a microphone/headset plug (black).

Software for the board is available in the element14 website, and will be rolled into a release of Raspbian – the Raspberry Pi foundation’s own spin on Linux, said element14.

Electronics Weekly has been itching to speak about this board since the middle of last year when its existence was revealed during research for the article ‘Getting Hi-Fi sound from Raspberry Pi‘, in which NXP engineer Wim Lemmers revealed how he was interfacing NXP chips to get high-quality sound out of the little computer.

A range of mini computer modules is likely to capitalise on the trend for affordable embedded computing started by Raspberry...