Update 2: The project is still growing and a lot of new features are already implemented (like a Twitter-Client and the integration of Telegram-Bots). Please check the GitHub repository and release notes to learn more about the new features (or follow me on Twitter) . I hope I am able to update this project page as soon as possible.

Update 1: First I want to say “thank you” to everyone who has read this project page and gave me feedback (either private or at the comments). It was a lot of fun to present this project at Maker Faire Rome 2015 and Microsoft Technical Summit 2015 and future events are still waiting. I added some pictures from the events. 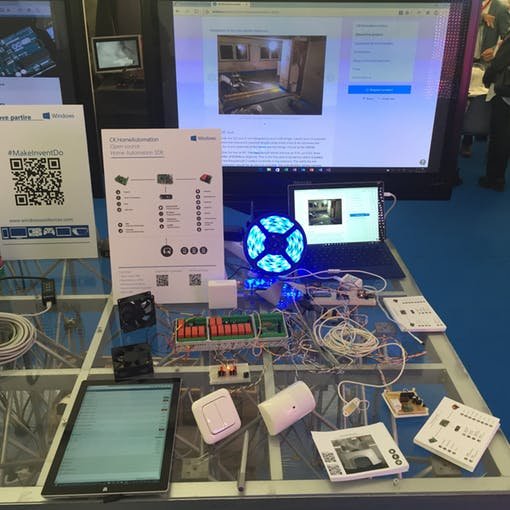 I am developing a home automation solution for the last 3 years. This includes the physical installation of the hardware and developing the software.

At this time, the following features are supported.

As we renovated our home 3 years ago, I decided to implement my own home automation solution. The main idea behind the implementation is to control everything from the power distributor using relays. Due to this decision every button, lamp, socket, roller shutter etc. needs to be connected by it’s own cable via the actuator to the power distributor. A bus like KNX or EIB is not required.

Note: Due to the fact that I live in Germany, every component is designed to work with the 230V power supply. Other kinds of power supplies may need further modifications. The installation of 230V cables (NYM), new power distributors etc. are done by my preferred electrician and not by myself.

We installed a new power distributor which is responsible for the two floors of our home.

In general, the I2C bus is not designed to work with longer cables but it is possible to increase the maximally possible length using some tricks (I do not know the reason for every optimization but these are the things I found at the WWW).

This optimized I2C bus is used to connect every board within the power distributor.

CCTools from Germany sells boards with relays which can be connected to the I2C bus. It is also possible to buy the boards as individual parts or the circuit board only. This allows replacing the port expander with pin compatible alternatives. The former is required because the available addresses of the devices are limited. I added holders for the relay and ICs so I can replace them easier if one o them is broken. Another point is that I can use a PCA9555D instead of a MAX7311 because the PCA9555D is cheaper and can be ordered easier (in Germany).

The HSRel5 relay board has 5 relays and 3 GPIOs. All required ports are taken from the internal PCF8574 8bit port expander which has 8 GPIOs. The first 5 are used for the relays and the last 3 can be used for other outputs. The relays require 12V to operate which can’t be provided by the port expander (which can only drive a LED). So, a relay driver is needed.  The relays are connected with the relay driver and the relay driver in return is connected to an inverter. This inverter is required because the state of all ports at the port expander is HIGH after the IC gets power. This will close all relays, which is an unintentional behavior.