Since the original Pi came out I’ve been interested in how much power it consumes. It’s become something of a launch week tradition to publish a new chart and some data. So much so that several people ask for it on launch day. This time the first was within 7 minutes of launch, which is a new record… The main reason I do this is that, if you are running a Pi on batteries, you need to be able to know how long it will run for. So I don’t go in for complicated benchmarking tests (although arguably perhaps I should, now that the CPUs are getting more powerful and hungrier) but a straightforward batch of tests that I’ve always used. It gives you an idea and enables you to work out your power budget.

With just an HDMI screen and a USB keyboard/mouse dongle connected, the Pi is powered using my bench power supply at 5.2V (supply current limit = 3 Amps) wired, via the eMeter’s calibrated 20 Amp shunt, to the uUSB power input on the Pi. 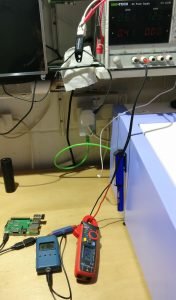 eMeter, clamp meter and bench PSU all being

consumption of Raspberry Pi 3B plus

eMeter, clamp meter and bench PSU all being used to check power consumption of Raspberry Pi 3B plus

Current and voltage are measured using my eMeter (also used my clamp meter to confirm this time) and calibrated shunt whilst performing four different activities. “Shooting video” is done without saving the video output to the SD card. Watching video is done with a 1080p video on the SD card. The rest is self-explanatory. The camera module is unplugged for all but the shooting video test. The Pi3B+ was connected to wifi, but no bluetooth devices were in use.

It’s important to understand the limitations of any equipment, tests and results. Comparing the readouts on the bench power supply, clamp meter and taking the actual data readings from the eMeter gives a reasonable degree of confidence in the results (when they agree, which they did).

The eMeter gives time-averaged readings (updated several times per second) to two decimal places of an Amp, which is good enough for our purposes. It won’t give a true picture of peak instantaneous current e.g. on power-up of the ARM cores from idle. This matters only when selecting a PSU to run your Pi, and you already have the official recommendations of a 2.5 Amp PSU for that. What we’re interested in is power usage over time, so you can work out what size battery pack or solar panel you will need.

I’ve never done power tests while using ethernet. But the new Gigabit ethernet chip definitely chews through more power than the previous Pi models (even when not in use). At some point I will consider adding this data to the chart/table, but not today. It would require measurement of “all of the Pis” which I haven’t got time to do right now – and you want your data NOW! 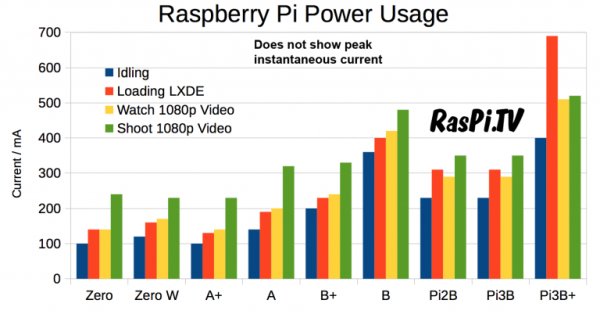 The thing that jumps out at you if you compare 3B+ with 3B is that it uses at least 170 mA more current – even at idle. This is due to the new Gigabit ethernet chip. I believe there will be a facility to switch this off if not used (at some point).

This seems to account for most of the differences except for while under CPU load. Whilst watching or shooting video, the GPU is handling most of the work, and this is unchanged on the new chip. So it’s not really surprising to see only small differences if you strip out the effect of the new LAN7515 chip.

Where we DO see a significant difference is in the loading of LXDE while under CPU load. You can see that this is significantly higher than with the Pi3B. It’s probably loading faster, but you don’t get ‘owt for n’owt. Faster processing takes more power, and that’s what we can see in the chart.

Raspberry Pi 3B+ uses at least 170 mA more than its older sibling the Pi3B, but can use significantly more when the ARM CPUs are being driven hard.

How Much Power Does Raspberry Pi 3B+ Use? Power Measurements