The Raspberry pi is a single board computer that is designed with an aim of providing help in the computer education to students at school. This is a nice platform to try different programming techniques and learn software tools also. The board is provided with a RCA connector which can be used to connect it directly to a TV screen which is based on PAL and NTSC standard. The board also has a HDMI connector output which can be used to connect the board to a HD TV. One can also use remote login to access the Raspberry pi and view the GUI (Text User Interface) on the PC screen. The Raspberry pi board is also very easy to interface with external devices or circuits through its pin outs. This board is also provided with an audio socket also. All these makes the Raspberry pi a suitable platform for playing and developing interesting games. 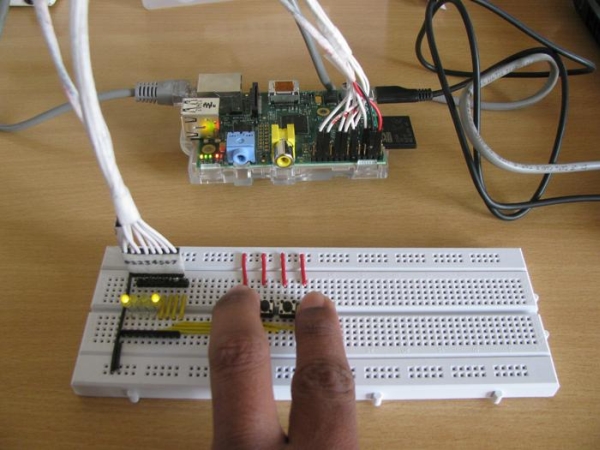 The gamepad is a simple circuit built on a breadboard with few buttons, LEDs and a resistor array. There are eight general purpose IO pins on the 13*2 pin connectors of the Raspberrypi board and among them four pins has been selected as input and then remaining four pins as output. The input pins are connected to push button and are pulled down using 1K resistors. The output pins are connected to the LEDs through another set of 1K resistors. For this project the Raspberry pi board is loaded with Ubuntu and is remotely accessed using VNC. To access the pins that coming out of the Broadcom controller the C library “bcm2835” has been downloaded and installed.

This game uses two MP3 files bgm.mp3 and kpm.mp3, one for the background music and the other for playing the keypad tone. There are so many command line media player software available that can be downloaded and installed on the Ubuntu of the Raspberry pi. The MPG321 is one such command line audio player that can be installed easily using the following command;
sudo apt-get -y install mpg321 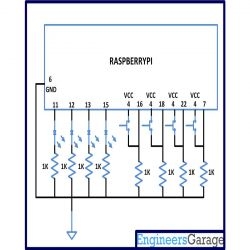 mpg321 <filename.mp3>
This software has lot of options like volume control, file seeking, remote mode of operation which makes it perfect to use with any kind of front end applications, here the HTML game as an example. More details about the options can be found at the man pages;
man mpg321
The game runs in a browser window and it communicates with the game pad through a Named Pipe or FIFO. There are multiple processes running which can read from the game pad and write the required commands to the FIFO for controlling the game. The JavaScript written in the game code simply reads from the FIFO for the input control data.
The NAMED PIPE or FIFO needs to be created using the following command in the same directory where the executable for the gamepad code written in C and the HTML game files written in HTML5 and JavaScript exist.
For more detail: How to Add Sound to Raspberry Pi Game Pad