How to build your own Quadcopter Autopilot / Flight Controller

This article will walk you through building your own controller whilst teaching you the details of how it works. This information is hard to find, particarly for those of us who are not aerospace engineers! Personally, it took me six months because much of my time was spent bug hunting and tuning, but with this article you can achieve the same in anywhere from a few hours to a few days. I’ll teach you the pitfalls so that you don’t waste your time like I did.

The first shortcut is your choice of hardware. I chose to build my own from scratch at a stage when I knew nothing of RC or how to fly – this was a mistake. I thought that I would save a few pennies by doing it myself but after lots of accidental short circuits, new microchips and sensors, I’ve spent a fortune! So do yourself a favour and buy the ArduPilot 2.5 control board, wire up your copter, learn RC, and how to fly, and then come back here. The board is essentially just an Arduino with some sensors connected which we will program in this article with our own software – by using it you have everything connected you’ll need to get flying – you’ll also be able to play with the excellent ArduCopter software. 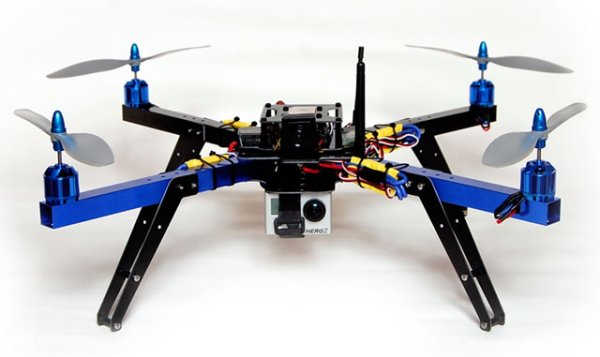 The ArduPilot project is sponsored by 3D Robotics – this means that they build the hardware and sell it for a small profit, and then feed some of this profit back to the community. The hardware and software is entirely open source and anyone is free to copy it. You can buy the original from them direct, or identical copies from Hobbyking (named HKPilot) and RCTimer (named ArduFlyer).

In this article, I am going to assume you have the ArduPilot hardware which is essentially an Arduino with attached sensors. If you choose to ignore my advice and build your own hardware, or use the arduino board, then you’ll need to replace the lower level code (the HAL library). I’m also going to assume you have a quadcopter in X configuration – although not a lot of work is required (just different motor mixing) to switch between +/X and octa/hexacopters, they won’t be given it any substantial attention in the article. Ideally, you’ve already flown your quad with the ArduCopter code loaded and hence you should have your motors connected as follows and spinning in the direction shown.

I’m also going to assume you have some experience with the arduino – or atleast with C/C++. The arduino libraries are not particularly brilliant or well suited, so we’ll be using some of the ArduPilot libraries which are superior. However, we’ll be keeping their use to a minimum in favour of the DIY approach (which is why you’re here after all). The first and main library that we’re going to use is the ArduPilot Hardware Abstraction Layer (HAL) library. This library tries to hide some of the low level details about how you read and write to pins and some other things – the advantage is that the software can then be ported to new hardware by only changing the hardware abstraction layer. In the case of ArduPilot, there are two hardware platforms, APM and PX4, each of which have their own HAL library which allows the ArduPilot code to remain the same across both. If you later decide to run your code on the Raspberry Pi, you’ll only need to change the HAL.

The HAL library is made up from several components:

RC Radios have several outputs, one for each channel/stick/switch/knob. Each radio output transmits a pulse at 50Hz with the width of the pulse determining where the stick is on the RC transmitter. Typically, the pulse is between 1000us and 2000us long with a 18000us to 19000us pause before the next – so a throttle of 0 would produce a pulse of 1000us and full throttle would be 2000us. Sadly, most radios are not this precise so we normally have to measure the min/max pulse widths for each stick (which we’ll do in a minute).

The ArduPilot HAL library does the dirty work of measuring these pulse widths for us. If you were coding this yourself, you’d have to use pin interrupts and the timer to measure them – arduino’s AnalogRead isn’t suitable because it holds (blocks) the processor whilst it is measuring which stops us from doing anything else. It’s not hard to implement an interrupt measurer, it can be programmed in an hour or so but as it’s fairly mundane we won’t.

Here’s some sample code for measuring the channel ‘values’ using the APM HAL library. The channel values are just a measure in microseconds of the pulse width.

Create a new sketch and upload the code to the ardupilot hardware. Use the serial monitor and write down the minimum and maximum values for each channel (whilst moving the sticks to their extremes).

Now let’s scale the stick values so that they represent something meaningful. We’re going to use a function called map, which takes a number between one range and places it in another – e.g., if we had a value of 50, which was between 0-100, and we wanted to scale it to be between 0 and 500, the map function would return 250.

The map function (copied from Arduino library) should be pasted into your code after the #include and defines:

It is used as:

It makes sense for the throttle to remain untouched, no doubt you’ve calibrated your ESCs with the existing throttle values (if you followed my advice about flying first) so let’s not play with it. Pitch and roll should be scaled to be between -45 degrees and +45 degrees, whilst yaw might scale to +-150 degrees.

My code in loop() now looks like follows after I’ve substituted in the map function with the min/max values for each stick. We’ll also change the variable types to long to support negative numbers.

You should now print the new values out and monitor them on the serial monitor. Ideally, they should be zero or very close when the sticks (except thr) are centred. Play with the min/max values until they are. There will be some jitter (waving about the true value) because the sticks on your transmitter are analog but it should be of the order +-1 or +-2 degrees. Once you’ve got your quad flying, you might consider returning here to introduce an averaging filter.

Ensure that pitch forward, roll left, and yaw left are negative numbers – if they’re not, put a minus sign before the map. Also ensure that the throttle increases in value as you raise the throttle.

Motors are controlled through the Electronic Speed Controllers (ESCs). They work on pulse widths between approximately 1000us and 2000us like the RC radio receiver – sending a pulse of 1000us typically means off, and a pulse of 2000us means fully on. The ESCs expect to receive the pulse at 50Hz normally, but most off the shelf ESCs average the last 5-10 values and then send the average to the motors. Whilst this can work on a quad, it behaves much better if we minimise the effect of this averaging filter to give near instantaneous response. Hence, the APM HAL library sends the pulse at 490Hz, meaning that the 5-10 pulses which are averaged occur very quickly largely negating the filter’s effect.

In setup(), let’s enable the outputs:

After your includes, let’s define a mapping of output number to motor name – this mapping is the same as the ArduCopter uses but the numbering starts from zero rather than one.

In your loop, after reading the radio inputs, let’s send the radio throttle straight to one of the motors:

You can now program your quad and try it, WITHOUT propellors. Slowly raise the throttle and the front right motor should spin up. By repeating the last line for the remaining three motors, all your motors would spin up although the quad will just crash if you have propellors on because we have to do stablisation – slight differences between the motors, props, ESCs, etc mean that slightly unequal force is applied at each motor so it’ll never remain level.

Next, we need to determine which orientation, or attitude as it’s known, the quad copter is in. We can then use this, along with the pilot’s commands to vary the motor speed. There are two sensors used for determining orientation, accelerometers and gyroscopes. Accelerometers measure acceleration in each direction (gravity is an acceleration force so it gives us a direction to ground) and gyroscopes measure angular velocity (e.g. rotation speed around each axis); however, accelerometers are very sensitive to vibrations and aren’t particularly quick whilst gyroscopes are quick and vibration resistant but tend do drift (e.g. show constant rotation of 1/2 degrees/sec when stationary). So, we use a sensor fusion algorithm to fuse the two together and get the best of both worlds – the scope of such an algorithm is outside the scope of this article, typically a Kalman filter is used, or in the case of ArduPilot, a Direct Cosine Matrix (DCM). I’ve provided the DCM link for interest if you have a maths background – for the rest of us we don’t need to know the details.

Thankfully, the MPU6050 sensor chip containing the accelerometer and gyroscopes has a built in Digital Motion Processing unit (aka sensor fusion) that we can use. It will fuse the values together and present us with the result in quaternions. quaternions are a different way of representing orientation (as opposed to euler angles: yaw pitch roll) that has some advantages – if you’ve programmed 3d graphics you’ll already be familiar with them. To make things easier, we tend to convert quaternions into Euler angles and work with them instead.

Here’s the code to use the MPU6050 sensor with sensor fusion.

For more detail: How to build your own Quadcopter Autopilot Flight Controller

I was using a Raspberry Pi as a LAMP server.  I also needed a new lamp for more lighting.  My...