When I was working on the capacitors section for the next version of Common Parts Library, I realized that it would be helpful to explain why one might pick one capacitor type over another. This information is important because there are a lot of factors (temperature characteristics, package, etc.) which might make a type of capacitor (electrolytic or ceramic) better than others for your project.

In this blog, we will explain all the different types of capacitors, their merits and demerits, and popular applications. We have included some recommendations for commonly used capacitor series with high supply chain availability from Common Parts Library and Seeed Studio’s Open Parts Library and linked to pre-created searches on Octopart, such as the following for 50V rated Panasonic’s ECA-1HM series for 10µF to 3300µF: 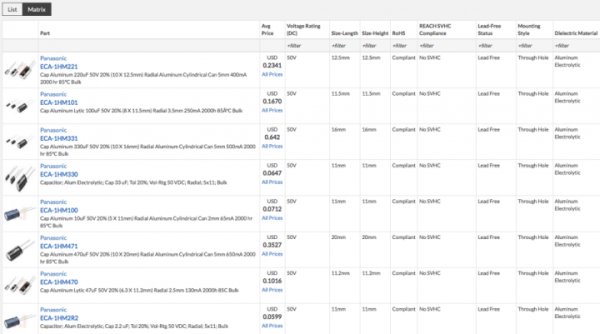 Capacitors are two-terminal components used for filtering, energy storage, voltage spike suppression, and many other applications. In their simplest form, they consist of two parallel plates separated by an insulating material called a dielectric. Capacitors store electrical charge. The unit of capacitance is Farad (F), attributed to Michael Faraday who was a pioneer in using capacitors for practical applications.

Even though capacitors are so commonly used, it can be tricky to select one for your project. While you might know what capacitance or voltage rating your project requires, capacitors have lots of other characteristics — such as polarization, temperature coefficient, stability, equivalent series resistance (ESR) and so on — that might make them a great (or poor) choice for your project. The most popular types of capacitors are presented below with this in mind.

TYPES
There are several different types of capacitors which differ by polarity, performance and cost. Below are some of the common capacitor types: aluminum electrolytic, ceramic, tantalum, film, mica and polymer capacitors, along with their characteristics, applications, package information as well as info on part selection.

Characteristic: Aluminum Electrolytic Capacitors are polarized, so they cannot be used with AC. They can achieve high capacitance value but with large variations, typically 20%.

Applications: These are useful in applications which do not need tight tolerances or AC polarization. They are most commonly used in power supplies for decoupling purposes, i.e. to reduce voltage ripple reaching the circuit. They are also used widely in DC/DC switching voltage converters.

Characteristic: There are two main types of ceramic capacitors: Multi-layer chip capacitors (MLCCs) and ceramic disc capacitors. MLCCs are very widely used in electronic devices and are popular because they have high stability and low losses. They have lower Equivalent Series Resistance (ESR) and variation compared to electrolytic or tantalum capacitors but can achieve lower capacitance (only up to a few µF) . Because of high packing densities, MLCC capacitors provide a size advantage and are great for printed circuit boards (PCBs).

Applications: Since these are not polarized, they can be be used with AC. They are widely used as a ‘general-purpose’ capacitor and used for high frequency blocking, filtering, oscillator tuning and EMI suppression.

For more detail: How To Select a Capacitor

Raspberry Pi 2B with FezHat Sensors and Azure IoT Hub

Introduction This a supplemental tutorial to our 003 tutorial. In this tutorial we're going to finish developing a UWP Application to...