Linux operating systems especially Ubuntu is preferred for all kind of programming and development. In a multi-tasking environment of the Operating System several processes executes at the same time and the Signals provide an Inter-Process Communication (IPC) method. The Operating System sends signals to the process to notify them about the events occurred and to control them. A Parent process can create another process, which are called the Child process and the Parent process can use signals to control the Child process. 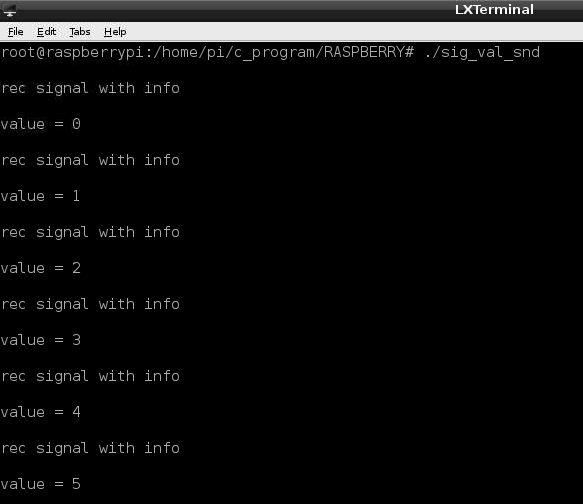 The Multi-tasking Operating Systems can run several processes at a time creating and effect of parallel processing with the help of the high speed ARM111 processor of the Raspberypi. A process can get the attention of other processes by sending signals to them. The signals can also be used to send data or value along with it. This particular article demonstrates how to send a value using signal between two processes.

A signal is a software interrupt that can be sent to a process which is currently executing in the Operating System. Most of the time the Operating system send signals to the processes, but process can also send signals to each other. Much like hardware interrupts it is a mechanism to notify a process that an event has occurred. Different signals are available which can be used to notify different events and these signals are differentiated by their signal numbers. The list of all the available signals in the OS and their signal numbers can be obtained using the following command:

The following table gives a list of the most common signals that a process might encounter in an Operating System:

The user programs should always try to use only the signals which are reserved for them, SIGUSR1 and SIGUSR2 to communicate between the processes. The steps which a process performs corresponding to a received signal are called ‘Signal Handling’. There should be a function called ‘Signal Handler’ inside the process which can perform the necessary things in response to a signal received.

Incase to get values or messages that are send along with the signals the function ‘sigaction ()’ can be used other than signal () defined in the header file <signal.h>. The signal () can pass only the signal number to the Signal Handler function whereas the function ‘sigaction ()’ has a third argument which is a structure holding the details of the received signal that can be passed on to the Signal Handler function.

Read more: How to Send Value Between Processes Using Signal

Tor (short for The Onion Router) is a system intended to enable online anonymity. The Tor client software directs internet...