Learning how to grow plants can be complicated and costly. Plants are resilient, but just one innocent oversight can ruin your crop. You can avoid these costly mistakes by letting a Smart Gardening System do the hard work for you!

If you would like to know more about hydroponics, Your Introduction to Hydroponics.

You’re ready to setup your own system? How to Start Growing Indoors 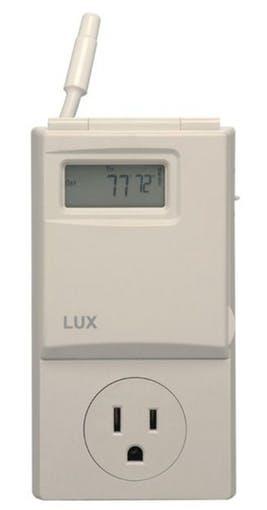 It was two years ago when I decided to try using an Arduino Uno microcontroller to replace my individual Lux WIN100 Heating & Cooling Programmable Outlet Thermostat. These outlets control an appliance, such as a small heater or, in this case, a ventilation fan. A device that is plugged into the outlet turns on and off the appliance by using temperature settings that you manually program into each device. This technique for controlling the ventilation fans is effective, yet uses several extension cords. The temperature outlet controllers use old-fashioned relays to switch the state of the device. My initial attempt was to hack an extension box inserting my own relays into it and connecting them to the Arduino Uno. It wasn’t very long before there was a mess of wires with lots of connector nuts and I was left feeling discouraged.

A home automation idea that I had bouncing around in my head for a while was to use wirelessly controlled AC outlets that use a hand-held remote-control. Hacking the remote control to send the signal for the ON or OFF button selected by a corresponding pin on the Arduino Uno shouldn’t be too difficult, right? The nagging concern that was preventing me from testing this idea was the fear that the signal would not be reliable and the Uno might “think” it had turned on a device when it actually failed. Eventually, I was able to convince myself that the best way to find out is to just try and see what happens. Unfortunately, the results of this test wasn’t much better than the relay attempt.

A search on the web for nearly any sensor or electronic doo-dad with “Arduino” will result in a number of products being sold for a few bucks. In this case, I found the 315Mhz and 433Mhz transmitter and receiver pairs that are within the frequency range of most commercial wirelessly controlled outlets. The greatest advantage to using the Arduino family of microcontrollers for these types of projects, is that you can find open-source software to get started. Another search on the web for an “Arduino library” and in this case, transmitter and receiver or tx/rx pair. Now, it was getting exciting for me. I could read the codes coming out of the remote-control, record them, and then program the Arduino to control the corresponding outlets. Designing the software to operate on the Arduino Uno became the challenge. The examples that come with the Arduino software and the examples included with libraries are an excellent start to a project. In my experience, once you start combining and making modifications to the examples it doesn’t take very long before you hit a wall. I don’t think I’m a good programmer, I think I’m a stubborn perfectionist.

In one of my favorite books, Zen and the Art of Motorcycle Maintenance the author, Robert Pirsig, speaks of the gumption trap. Essentially, the gumption trap is an event or mindset that can cause a person to lose enthusiasm and become discouraged from starting or continuing a project. Knowing when to push through the discomfort and frustration and when to take a break and walk-away from the project are personal challenges. There have been times when if I had taken a break, I might not have come-up with an excellent solution to a conflict in my source code. Contrary, there have been times when I have walked-away for a month and worked on a completely different type of project feeling reinvigorated. Perhaps, if the project is important enough, we will be compelled to return to work on it. The trap is convincing ourselves that the project isn’t worth returning to even when it could be amazing. Maybe it really isn’t worth returning to complete and this is where many projects end. 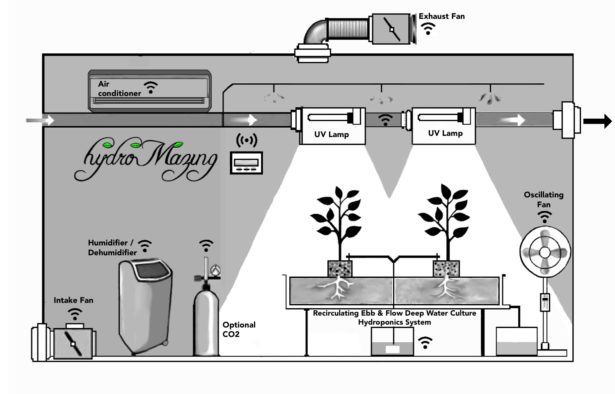 The software I have developed has been programmed into the microcontroller and features a set of base parameters for timing, managing, transmitting, and receiving “sensor” objects and “appliance” objects. Control of appliances is achieved through a set of algorithms I have named “TheDecider,” which makes decisions based on sensor readings and pre-programmed thresholds and prompts the microcontroller to turn on or off the wirelessly controlled outlets. I wanted the system to be easily modified to work with other environments including aquaponics, growing mushrooms, and anything where control is achieved by reading sensors and operating appliances based on programmed rules. The wirelessly controlled outlets proved to be a reliable method of controlling the fans using the Arduino to send the signals depending on the temperature sensor’s readings. It didn’t take long for the source-code to evolve into a beast. The Arduino family of microcontrollers is limited in how many instructions it can run and hitting the program size limit doesn’t take very long when you want to control more than a few blinking LEDs. I have found that the size limitation has forced me to write better, more efficient code than I initially do. Even with creative variable handling and custom libraries, eventually, there is a need for another microcontroller or to move to a larger one.

The aim of this project is automatically checking emails and showing the presence of new messages with different LED colors...