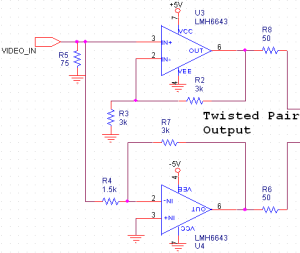 raditionally, the physical environment for transmitting video signals over long distances has been the shielded coax cable. Its quality and advantages are well known, and many times designers looking for off-the-shelf solutions do not know that long distance video transmission can be achieved with the same quality but for a much lower price.

The solution described in this article proposes as the physical environment the use of a simple twisted pair cable; in addition to its lower price (compared to the shielded coaxial cable) it also features a much smaller weight, which sometimes can be a critical design criteria, especially for instance, in automotive environments, where cable weight account for the most percentage of the mass of a car.
Usually the regular configuration of a video transmitting system consists of an output amplifier (which either amplifies or acts as a simple repeater) mounted in the part of the system which generates video signal, connected via a shielded coax cable to the receiver part of the system. At the receiver, the signal is filtered, then amplified again, and fed to the display or perhaps to a video processing unit

As stated above, using this configuration has a significant impact on both the price and the weight of the system. A much more advantageous solution, from these points of view, may be achieved through the use of a differential amplifier at the transmitting side, which would thus be able to confer a good degree of immunity to the video signal with respect to outside influences. The Video Driver is shown in Figure 2. It converts a single-ended input signal from a camera or DVD player into a differential signal that drives the twisted-pair line. The input receives an NTSC composite video signal with 1VPP amplitude, and the output drives the twisted-pair with a 2VPP differential signal. A 50Ω source resistor is in series with the outputs of both op-amps, matching the Video Driver output resistance to the twisted-pair characteristic impedance.

In the receiver circuit of Figure 3, R16 is adjusted so that the overall gain of the system is unity (gain of the last op-amp is greater than one to compensate for signal loss). C1 and R14 provide a zero-pole function that compensates for attenuation of higher frequency signals in the twisted pair cables.

This is a fine and good solution, however, its main disadvantage is that it needs a negative powers supply. Most digital systems do not include such a supply, as generally there is no need for it, and introducing it only for the purpose of transmitting video cheaper might prove to be working against this particular goal, through the additional pricing required by a negative supply both in the video receiver and in the video transmitter. These disadvantages may be eliminated through the use of a single-supply configuration. We will detail this architecture more, as it is a realistic one, and involves only common components (discrete components and op-amps). Basically, what needs to be done, is to generate two “differential” signals. They are differential with respect to some specific positive voltage, which generally may be half of the supply voltage of the operational amplifier, in order to allow full use of the linear characteristic most op-amps have at VDD/2. As such, the video driver in Figure 4 performs both a summation and a subtraction operation. The upper op-amp, adds the video signal to a constant voltage, called VBIAS, and the lower op-amp subtracts the video signal from the same constant voltage, yielding two differential signals, that will be used by the receiver to rebuild the original video signal.

The two 50 Ω resistors are used for impedance matching with the video receiver. All other resistors are used to implement the two arithmetic operations with the amplifiers. Generally, for good results, these should be 1% tolerance or even lower (0.1% is preferred). The common waveform of the NTSC video signal is shown in the figure 5 (roughly corresponding to a color bar, but only with the luminance information).

As stated, the purpose of the above circuit is to transform this signal in two signals which are symmetrical with respect to the VBIAS voltage, which in this particular case is 1.65V or exactly half of the supply voltage of the op-amps. The VBIAS voltage can be easily generated with a simple voltage divider from the 3.3V supply voltage followed by a simple repeater op-amp. The repeater op-amp may be skipped if small value resistors are used to generate the biasing voltage, but this will adversely affect the current consumption of the overall circuit (Figure 6).

Hello fellow 'instructablers'! In this instructable I'll present you a brand new project that I’ve just completed. In fact, I’m...