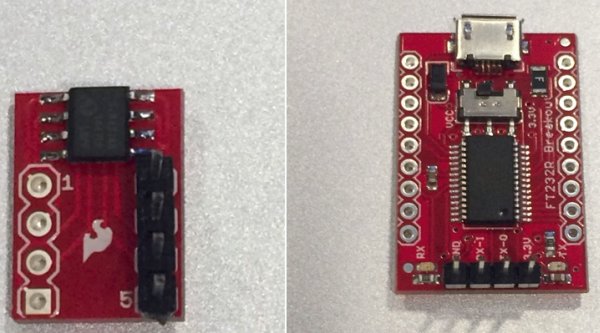 I stood in stunned silence at the smoke billowing up from the hardware on the workbench. Just moments before, it had been operating as expected, before self-destructing with a sound that can only be compared with a gunshot. The failure of the hardware under test had an unexpected consequence: the computer that had been using a USB-to-UART converter to communicate with the hardware experienced a USB fault that was not recoverable. The computer was now damaged and worthless.

A simple isolation circuit that costs only a few dollars could have been used to protect the USB port on the computer. Embedded system developers get used to plugging strange hardware and components into their computers on a daily basis and rarely consider the consequences of what their actions might bring.

There are a number of times when an isolated USB-to-UART converter can come in handy. For example, during development of battery powered devices, there is a tendency to leave the USB-to-UART converter attached to the device, which, without isolation, will connect it through the host’s ground to an Earth ground. The device may work perfectly, but when detached from the computer, it doesn’t work at all. The isolated converter will keep the device and host grounds separate, allowing any grounding issues to be found early on rather than later.

The most important use of an isolated USB-to-UART converter is of course in fault conditions. Consider the consequences of connecting an untested electronic board to an expensive laptop such as a MacBook Pro. The USB specification and hardware layer does have protection circuits, but they may not be rated for devices operating at hundreds of volts DC. When a device fails on the USB bus and has the potential to put more than 5V, or significant current, onto the bus, it is a wise decision to spend $20 and isolate the two devices.

Selection of an isolator

The isolator selection requires careful consideration. UARTs have traditionally been considered low speed devices but modern microcontrollers and interfaces can support baud rates in excess of 1 Mbps. Many isolators, especially opto-isolators, have maximum baud rates under 100 kbps. The Si8421BB-D-IS from Silicon Labs turns out to be a really good match to this application, but is no longer recommended for new design. An alternate is the ADUM3211ARZ, but this part was not tested, so use at your own risk.

The SI8421BB supports 2.5 kV of isolation for 1 minute. The BB designation shows that the isolator is capable of baud rates up to 150 Mbps. The low volume cost for the SI8421BB-D-IS is only $1.46, but if that is too expensive then the SI8421AB-D-IS is only $1.05 (with a maximum baud rate of 1 Mbps). Another advantage of the SI8421BB-D-IS is that it has two isolators in the 8-pin SOIC package, which is perfect for a Tx/Rx signal pair. The isolators are unidirectional, but laid out such that they are pin-compatible with the Sparkfun USB-to-UART BOB if proper care is taken.

For more detail: Inside the ALU of the first ARM microprocessor

The device is designed for contactless measuring and monitoring temperature of objects. It is built on Melexis MLX90614 sensor and...