The Intel® RealSense™ gesture camera represents another foray by Intel into the consumer products space. The camera has been incorporated into the Lenovo ThinkPad Yoga 15.  Intel disclosed at IDF14 that the device is formed using three components: a conventional color CMOS image sensor camera, an infrared images sensor, an infrared light projector (the main focus of this article), plus an image processor. It can also incorporate a pair of microphones. 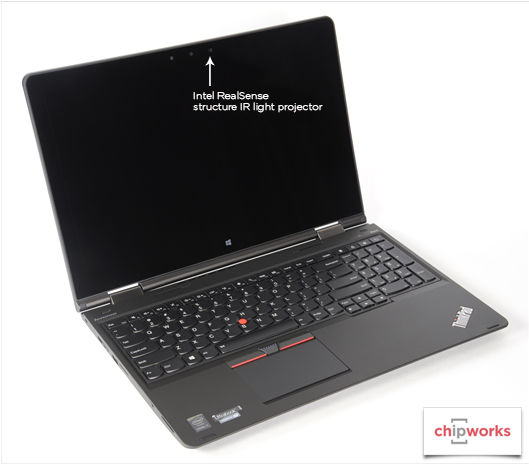 The Lenovo ThinkPad Yoga 15 contains a PCB assembly which looks essentially identical to that disclosed by Intel. It features the aforementioned components all mounted on a long thin PCB that fits along the top edge of the laptop screen.The Intel RealSense is based on the same principles as the PrimeSense technology used in the Microsoft Kinect 1. PrimeSense was recently purchased by Apple. The infrared structured light projector emits a structured pattern of infrared light which is reflected back from the scene and is detected by the infrared image sensor.  The position of the reflected light pattern depends on the distance to the reflecting surface, as a result of simple geometry. Hence with bit of trigonometry it is possible to reconstruct a 3-dimensional (3D) scene.The structured light projector contains an IR laser diode, a line lens and a MEMS resonant micro mirror device all mounted onto a small die cast aluminum optical bench. The line lens takes the relatively circular laser beam and stretches it along a horizontal line. The comb driven micro mirror is driven into resonant oscillation by an electrical signal which is applied to two bond wires. The reflected IR light is projected onto the scene.

For more detail: Inside the Intel RealSense Gesture Camera