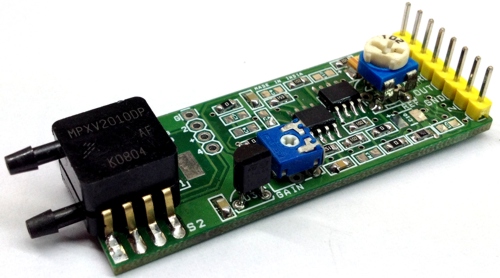 The most popular silicon pressure sensors are piezo-resistive bridges that produce a differential output.

Voltage output is in response to pressure applied to a thin silicon diaphragm. Output voltage for these sensors is generally 25 to 50 mV full scales. Interface to microcomputers, therefore, generally involves gaining up the relatively small output voltage, performing a differential to single ended conversion, and scaling the analog signal into a range appropriate for analog to digital conversion. The circuit published here is simple solution which amplify low voltage differential signal and provide single output voltage which can be directly feed to ADC of micro-controller. Instrumentation amplifiers are by far the most common interface circuits that are used with pressure sensors. An example of an inexpensive instrumentation amplifier based interface circuit uses an LM358 dual operational amplifier and several resistors that are configured as a classic instrumentation amplifier with one important exception. PR2 Trimmer potentiometer provided to set the offset voltage 0.75V. Setting the offset voltage to 0.75 V results in a 0.75 V to 4.75 V output that is directly compatible with microprocessor A/D inputs. Over a zero to 50° C temperature range, combined accuracy for an MPX2000 series sensor and this interface is on the order of ± 10%. Trimmer potentiometer PR1 helps to set the gain. PCB provided with MPXM2010GS and MPXV2010DP dual footprint options, for testing purpose MPXV2010DP sensors has been used.

Earlier this year Google introduced the AIY voice project, which allowed makers to turn a Raspberry Pi into a voice-controlled...