In this entry I will demonstrate how to interface the MCP3008; an SPI-based analog to digital converter (ADC) integrated chip, to the Raspberry Pi. This enables  the Raspberry Pi to interpret analog voltages that are in turn typically emitted by analog-based sensors to reflect a measure of  a physical characteristic such as acceleration, light intensity or temperature. We will start by briefly examining the SPI interface.

A gentle introduction to the Serial Peripheral Interface (SPI)

The Serial Peripheral Interface (SPI) is a communication bus that is used to interface one or more slave peripheral integrated circuits (ICs) to a single master SPI device; usually a microcontroller or microprocessor of some sort. Many SPI  Peripheral ICs exist. They include, analog to digital converters (ADC), digital to analog converters (DAC), general purpose input/output (GPIO) expansion ICs, temperature sensing ICs, accelerometers and many more.  In this regards the SPI bus is similar to the I2C bus. the SPI’s main advantage over the I2C bus is that the SPI bus speeds can be very fast; 10Mbps is not unusual and maximum speeds can go as high as the hardware (master controller, slave peripheral, and printed circuit board traces connecting them) will go. Speeds that exceed 50Mbps are not unusual. 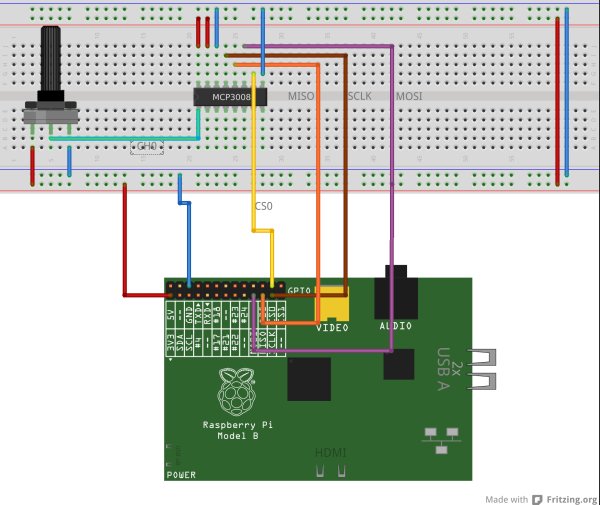 Having said that, the main disadvantage of the SPI bus w.r.t the I2C bus is the numbers of wires required by the bus. The I2C bus is a ‘2-wire’ bus that theoretically can be used to connect up to 127 devices, and significantly more if a 9-bit addressing scheme is used instead of the classical 7-bit address. The SPI bus is a ‘3+n wire’ bus. where ‘n’ is the number of slave devices attached to the master SPI device. For example in the example shown in Figure 1, a total of 6 wires are required by the SPI bus and six corresponding pins required on the master SPI device to interface the 3 slave SPI devices to the master SPI controller. This means that not only is the number of wires on an SPI bus larger than on an I2C bus, but that the number of wires continue to increase linearly as we add more slave devices on to the bus. Notice that slave SPI devices almost always require 4 pins to attach themselves to the SPI bus.

The 3 SPI wires shared by all devices on the SPI  bus are:

Finally, there are 4 different SPI modes that can be used. Each mode defines a particular clock phase (CPHA) and polarity (CPOL) with respect to the data. For the purpose of this tutorial we will be utilizing SPI mode 0 which is also known as mode (0,0) or mode (CPHA=0,CPOL=0).

To learn more about the SPI bus, I refer the reader to these excellent resources:

The MCP3008 chip is an SPI based analogue to digital converter (ADC). It has 8 analog input channels that can be configured for single ended and differential ADC conversions. The MCP3008 is a 10-bit ADC  that can convert  up to 200 kilo samples per second (200ksps) (@ 5V!!). The MCP3008 comes in 28 PDIP and SOIC packages. A pinout is provided in Figure 3. The datasheet for the MCP3008 can be can be downloaded from.

Typically the VDD pin is connected to  3.3V power. The AGND and DGND pins can be connected directly to the ground reference point. The VREF pin is the reference voltage which is the largest possible voltage that the ADC can interpret. In our scenario we will connect the VREF pin to 3.3V (same as VDD). So if 3.3V was sampled on any of the ADC’s channels it would be interpreted as the maximum digital value that can be represented by this 10-bit ADC i.e. 2^10 – 1 = 1023. Similarly the smallest analog voltage that the ADC can detect (also known as the ‘LSB size’) is VREF/1024. Which in our case is 3.3V/1024= 3.22mV and represents a digital value of 1. The equation that converts between the analog voltage and its digital interpretation is given by “Digital output code = 1024*VIN/VREF”; where VIN is the analog input voltage and VREF is the reference voltage.

A complete SPI transaction for the MCP3008 (SPI mode 0) is depicted in Figure 4. The complete transaction consists of 3 bytes being transmitted from master (Raspberry Pi) to slave (MCP3008) and 3 bytes transmitted from slave to master. Recall that due to the nature of the shift register  operation of the SPI bus, shifting 3 bytes into the slave device (writing to the slave MCP3008) will by default cause the 3 bytes in the slave device to be shifted out into the master device (Raspberry Pi). 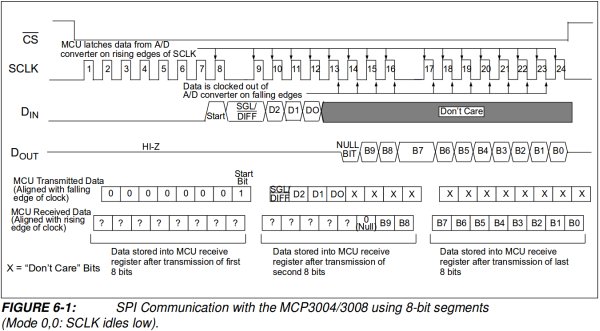