This instructable will cover how to get a root recovery console on a Raspberry Pi 2 with a NOOBS SD card using a Jtagulator, PuTTY, and three wires. It is thanks to the Instructables Raspberry Pi Build Night sponsored by Instructables and the Rabbit Hole.

What you will need: 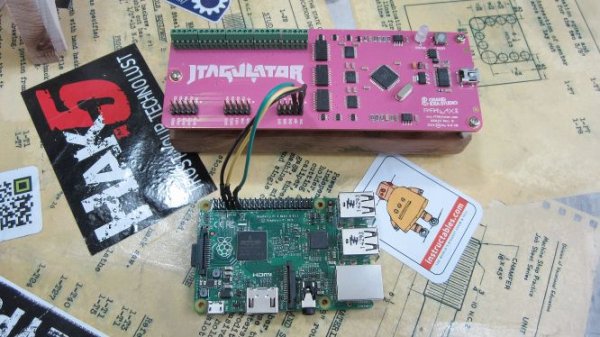 Step 2: Setting Up the Session

Connect your Jtagulator to a USB port on your local computer and open your favorite terminal software. For the purpose of this tutorial, I am using PuTTY on a Windows machine.

Click the ‘Open’ button on the PuTTY Configuration dialog

Ah, there we go! A command list. We start by setting the target system voltage. [Pic 3]

Now our JTagulator is set up to use the same voltages that the Raspberry Pi 2 uses.

Remember when I said the order of the two non-ground wires didn’t matter? One of the features of the Jtagulator is that it can attempt all possible uart wiring and speed permutations to discover a serial port by brute force.

If we didn’t know which pins on the Raspberry Pi 2 were our serial port, we could use more channel / more wires here to scan more possibilities. You get the idea.

Here is the last part of all of the text the Jtagulator has sent us while scanning for a UART. As you scroll through them all, take a look at the ‘Data:’ In my example here, the only one that spit out anything that looks human readable is the last one. 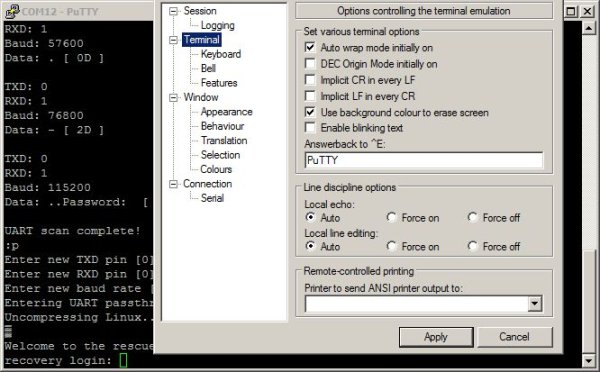 We see the Linux Kernel booting up and a recovery console login prompt!

Last Friday I got some spare time (finally!) and, with the help and tools of my friend Alfredo, we placed...