In a nutshell, the MeArm is a “flatpack” robot arm that you can build with just a screwdriver and no soldering. It’s made by Kitronik  and different versions of the kit can work with a Raspberry Pi, Arduino or BBC micro:bit. 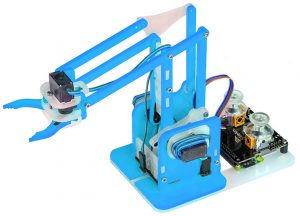 The MeArm can be controlled directly through the on-board joy sticks, or it can be made to move by programming, in languages such as Python or JavaScript.

Kitronik is a Nottingham-based electronics company that specialises in project kits and learning resources for schools, as well as the general maker community.

The aim, says the company, is that MeArm can be used across STEM subjects and inspire children to become interested in coding, electronics and robotics.

It has been designed from the ground up to be easy to build and use and to be relevant to all experience levels, with simple coding capability which means enthusiastic schoolchildren (and their teachers!) can begin coding the device as soon as it is built. Its compatibility with the BBC micro:bit, Arduino and Raspberry Pi ,and its use of different coding editors, means that MeArm can suit every ability level.

Experts of the future

The MeArm was developed over the last five years by Dr Ben Gray who has since joined Kitronik to oversee the product’s further development. 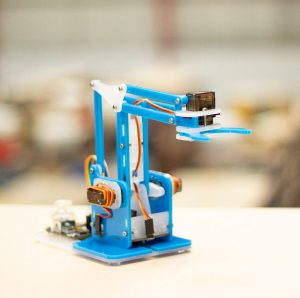 I am pleased to see the MeArm project come to life and I look forward to seeing more students and makers using the device,” said Dr Gray.

My aim for the MeArm was for it to be accessible and easy to build so I am confident that enthusiastic electronics experts of the future will have fun with the device and, hopefully, develop a love for robotics and coding.

The company will manufacture and distribute the MeArm as part of their range of BBC micro:bit, Arduino and Raspberry Pi (pictured, top) compatible kits and accessories.

The contents of the Pi compatible version, for example, includes:

Note, you would require your own Raspberry Pi and power supply.