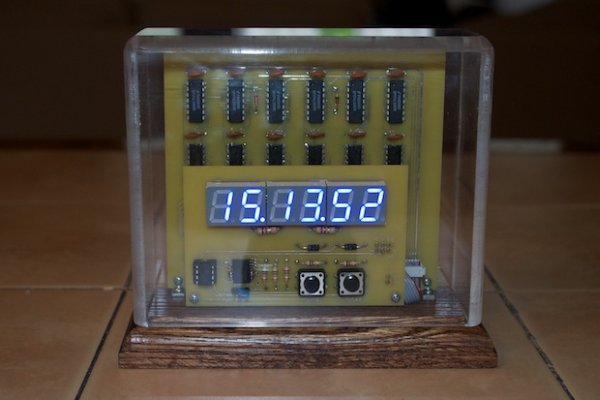 Since it was one of the first things I ever built, I decided to put it in an enclosure of its own and consider it too as a finished product.

The problem was that the prototype never ran properly. It worked, just not as well as it should. Needless to say, I tried to fix it in the way of an Arduino upgrade. On paper everything should run perfectly, but in the real world, it just doesn’t. The clock bounces all over the place. It’s more of a random number generator than a clock. I really thought that moving away from the 60Hz line signal as a timebase to a solid 1Hz signal from a DS3231 RTC would solve all my problems. At the end of the day, it boils down to the fact that it’s all soldered together on a DIY homebrew PCB. The holes that I drilled are too big for the pins; resulting in some pretty shoddy-looking soldering. It’s a noisy circuit, and I’m sure there’s some grounding issues in there too.

I put in a bunch of caps to help filter out the noise, but I think the board is just fundamentally flawed. You can polish a turd, but it’s still a turd.

It’s just a shame to throw it in a closet and forget about it. The case came out so nice and it looks great in the living room. I’m going to gut it, and replace my old 7490 prototype board with something brand new. I’m going to keep it a 7-segment clock, so I’ll have to design a new PCB for the display.

I was thinking that I could just run the whole thing off the Bare Bones Arduino/DS3231 shield that’s running it now.

Host your own blog from a $25 Raspberry Pi computer