In this instructable I’ll show you how you can build your own LED Rubik’s cube. This project was done for an introductory electronics course at Pomona College. Groups were given approximately two months to complete a project of their choosing, the only requirement being that the project rely on electronics built by the students.

Our group decided to build a Rubik’s cube that uses RGB LED’s for its faces, and buttons to simulate rotations. This should walk you through the process in enough detail for it should be clear what you would have to do to recreate our project.

Below are the components on which the cube’s electronics run: The RGB LED’s, resistors, and pushbuttons are self-explanatory, but the Shift Registers aren’t. The LED’s can generally be found for about $.75 each, while the shift registers are about a buck a piece on Amazon.com. The buttons are on Amazon and are about $.05 a piece. In isolation, a single shift register gets you eight outputs for the price of three I/O’s on your Arduino. It is an integrated circuit that requires power and ground, and takes 3 inputs from the Arduino. These input pins (11,12,14) are called the clock pin, latch pin, and data pin respectively. Of the shift register’s sixteen pins, eight are outputs which can be used to control various devices digitally. The states of these outputs are determined by sending the shift register data. Given one byte of data the shift register will turn its eight outputs either high or low, 1 for high, 0 for low. The Arduino uses the clock and latch pins to tell the shift register when to receive data and when to process it, while the the data pin is where the data is actually carried. The Arduino has a built in command to give data to the shift register. A tutorial can be found here: http://www.arduino.cc/en/Tutorial/ShiftOut. Knowledge of the shift Out command described in the tutorial is important, but easily summarized. The syntax is:

digital Write(latch pin ;LOW); //signals shift register that it is about to receive data

By connecting each LED to a shift register, and shifting out a data array of 54 bytes to a daisy chain of shift registers, we can control our LED’s however we want. Using only digital writes, the three diodes in an RBG LED provide us with 8 colors to choose from: Red, Green, Blue, Yellow(RG), Violet(RB), Teal(BG), and White(RGB). If we connect our LED’s systematically so that their leads correspond to the same pins on each shift register, then we can define 8 bytes, each of which represent a color an LED receive.

To operate the cube we create a 54-byte array, in which each of the six colors we choose appears nine times. The order of bytes in this array is important, because, upon start, this array will get shifted out immidiately, and must bring the cube to a state in which it is already solved. Rotations are executed by swapping array values in a one-for-one manner, and then shifting out the array again. As each LED always corresponds to the same index in the array, we can easily figure out which values must be swapped to achieve a given rotation.

Upon inspecting a Rubik’s cube you should find that there are exactly twelve distinct operations that can be performed. A Rubik’s cube has six faces, and we can take any face and rotate in one of two directions. Keeping a fixed orientation, each rotation will change the position of twelve squares along the edge of the cube, as well as 8 squares on one of the faces. Thus, in our code, we must have twelve subroutines that each swap twenty bytes in the array. For operating the cube, we decided on 8 buttons per face, so that we can rotate either of the four edges of that face in either direction. For a cube with six faces, and 48 buttons, there will four sets of twelve identical buttons. To account for this we electrically connect identical buttons, so that they can share an input at the Arduino. Thus, we use 15 pins on the Arduino in all. We could have cut this number down buy addressing the buttons with a multiplexer that requires fewer inputs. While the theory behind how the cube works is straightforward, implementation was difficult. Our first prototype was built on a breadboard, and contained an unruly amount of wires. Doing some numbers:

8 buttons x2 wires per button (one wire to Arduino and one to ground) = 16 wires.

Let’s be nice and say we would required about 90-100 wires per face. At six faces, it becomes impossible to design a self contained Rubik’s cube using this many wires. At a certain point we came to the reality that we were going to have to design our own circuit boards. 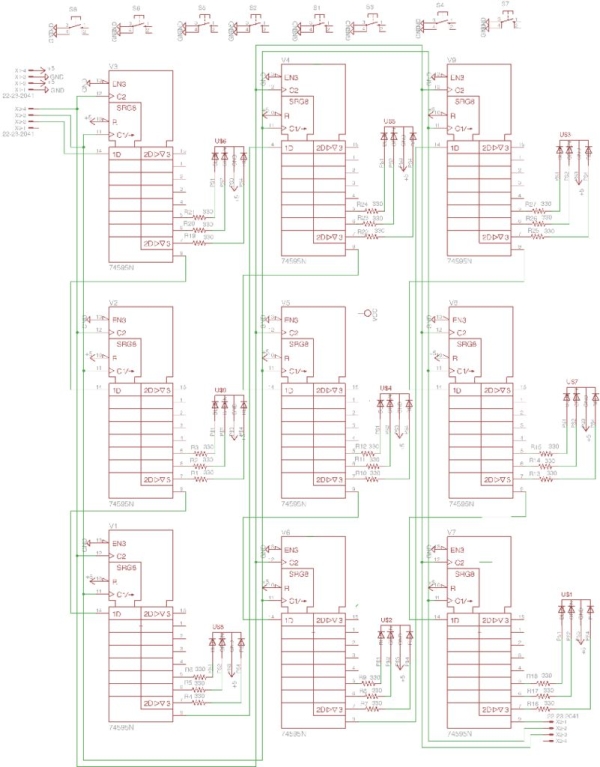 Designing a circuit board is not too difficult with some guidance. We used Eagle Hobbyist to design a 4″x4″ circuit board that did everything our bulky prototype was capable of doing. Eagle is a neat software package that works by compiling enormous libraries of parts that one can add to a schematic file. In the schematic file we add our parts and then use the ‘net’ function to electrically connect the necessary parts. From the schematic file, Eagle automatically creates a board file, in which we design the board’s layout, including the size and spacing between parts. We then use the auto-route function to calculate the most efficient way to electrically connect all of the pins as designated in the schematic file. Once satisfied with the board, we export a series of gerber files that any circuit board printer read to fabricate printed circuit boards (PCB’s). Eagle does offer links to services where you can order your board boards directly. The two photos above are images of our schematic and board files. With our circuit boards in hand, we had a LOT of soldering to do. All of our components must be soldered directly into each board, a total of nearly 300 joints per board. A solid workstation is an must. Ideally you’ll have a stand that can grip your board by the edges. Solder Flux is also an invaluable tool. It’s a flowing agent that helps with heat transfer. This can be an advantage because too much heat can be damaging to your components. It also saves quite a bit of time in the long run. Solder wick, to remove solder is also essential. You will make mistakes, and this will come in handy. Lastly, some isopropyl alcohol with a small brush to clean the board can also be very helpful, as solder flux is sticky when it dries. In order to enclose the Arduino in the cube, we screwed it to a spot in one of the boards with no routing. We also had to remove the Arduino’s power and USB ports to save space. We instead soldered our own USB cable directly to the Arduino. We had to determine which of our pushbuttons were redundant, and connect those buttons, linking only one button in each group to the Arduino. We connected boards together, giving them all a common +5 and ground, also making sure that the last shift register on one board is properly connected to the first on the next (clock, latch, data) . Thus, a total of 10 wires link a board to its two neighbors. On the schematic and board files in Eagle, we added the appropriate connectors to make this process easy. The photo above shows the six boards with all of the wiring done. Assembling this thing required a lot super glue. The process was carried out one edge at a time, leaving ample time for drying. The final face, the one carrying the Arduino, was sealed using silicon rather than super glue, allowing us to break the seal in the future if needed. We’re pretty happy with how it turned out, though we are still waiting on diffuser caps for our LED’s to take the edge off the brightness. Sorry for the crappy video. A better one will be coming soon, hopefully. Our code is included in the next step. Our hope is that if you’re crazy enough to build a second copy of the world’s most useless/expensive Rubik’s cube, you’ll find this instructable to a handy guide. It’s not an instruction manual by any means, but it should give you a clear idea of what the challenges are and how you can address them.

Please contact me if you have questions. I’m hoping to add to this instructable as I continue to update the cube. The next step is to try and add modes so that it can function as an RGB LED lamp as well. I’m also working on getting better quality images of the schematic available for download.

A very special thanks goes out to Tony Grigsby and Dwight Whitaker at Pomona College. None of this would have been remotely possible without their assistance.

1 INTRODUCTION In this modern world crime has become ultra modern too! In this current time a lot of incident...