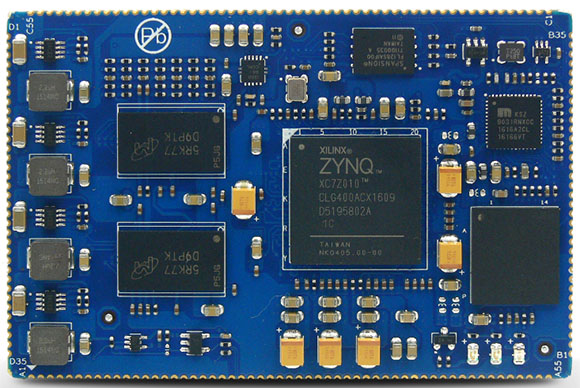 The MYC-C7Z010/007S has 75 x 50mm dimension. It ships with 512MB DDR3 SDRAM, 4GB eMMC, and 16MB quad SPI flash. There’s a Gigabit Ethernet PHY and external watchdog. A 1.27mm 180-pin stamp-hole (Castellated-Hole) expansion interface is also there for ARM and FPGA interfaces that are useful to improve shock resistance. Supported I/O incorporates single USB and SDIO interfaces plus a pair of serial, I2C, CAN, SPI, and 16-channel ADC.

An optional, $29 MYD-Y7Z010/007S I/O Cape plugs into the GPIO interface offering an HDMI port, a user button, and LCD, camera, and dual Pmod connectors. The LCD interface supports optional MYIR 7- or 4-inch capacitive and resistive LCD modules. The HDMI port only supports 720p resolution for now. The MYD-Y7Z010/007S board is further equipped with a reset key and boot switch. There’s also a 12V/2A DC input.

Hackers in Residence: The Sound Visualizer

Introduction This tutorial shows how to put together a sound visualizer that I created, during my time in the SparkFun HIR...