A startup called Pleiades is over a third the way to its Kickstarter goal for funding a hackable Linux quadrocopter that starts at $520. Spiri, which runs Ubuntu Linux with Robot Operating System (ROS) extensions on a dual-core Freescale ARM SoC, is an airborne craft that uses three cameras and a variety of sensors to navigate autonomously.

At publication time, Pleiades had pulled in about $40,000 in funding, with 20 days to go to reach its $125,000 goal. A Spiri unit that is set to ship in April 2014 costs $525, or $575 with a developer kit preview or an educator kit. A $775 pledge gets the flying robot to you by February, and a $5,775 pledge means you’re first in line in January, along with extensive development assistance from the staff. 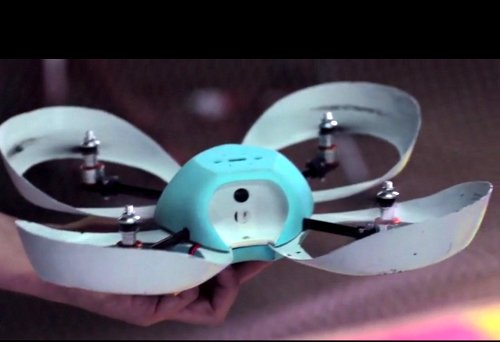 Spiri is reminiscent of Parrot’s popular, Linux-based AR.Drone 2.0 quadrocopter (pictured at right; click to enlarge). At 340 x 340 x 68mm (13.4 x 13.3 x 2.7 inches), it’s considerably smaller, but it’s also heavier at 400 grams. Like Parrot’s $300-and-up device, Spiri is designed to be a hackable drone with multiple applications. According to Pleiades’s somewhat breathless Kickstarter promo copy, “Spiri can be a courier, a rescuer, a spelunker, a cartographer, a playmate, a gardener, an inspector, a reporter, a teammate, a wanderer, anything.”

Spiri has a faster processor than the Cortex-A8-based AR.Drone, featuring a dual-core, Cortex-A9 Freescale i.MX6 DualLite system-on-chip. Compared to the mainstream Dual version, it’s clocked to 1GHz instead of 1.2GHz. It also has a less powerful GPU (Vivante GC880), but that’s not likely to be much of a factor while you’re dive-bombing your neighbors.

While the AR.Drone 2.0 requires that the craft be controlled by a remote — or a smartphone app remote — Spiri is primarily intended to operate autonomously, navigating according to user programming. This autonomy lets Spiri fly farther, battery allowing, and potentially enables multi-craft collaboration. The quadrocopter can follow a route or be programmed to hover or respond to stimuli. Remote control will be possible, too, says Pleiades, with the craft controlled via WiFi or Bluetooth. There are no details, however, on a remote control or smartphone app.

Spiri uses three different cameras and a host of sensors to help it navigate. Facing downward is a 60fps CMOS camera with an optical flow processor. This enables the craft to keep from drifting off course, says Pleiades. A standard 720p video camera faces front, letting Siri avoid obstacles while also enabling video footage to be stored on the device’s 4GB of flash memory. A top-mounted USB port enables expansion, but there’s no mention of an SD slot, nor is RAM detailed.

So far, the camera setup is similar to what the AR.Drone offers. However, Siri also includes a Photonic Mixer Devices (PMD), 3D Time of Flight (TOF) range finding camera. Facing front, this is essentially a scannerless LIDAR system, which resolves exact distances based on the speed of light. It works together with the other cameras to avoid obstacles such as trees and power lines.

These camera inputs are augmented by sensors including GPS, accelerometers, a magnetometer, and even a pressure/temperature altimeter and an acoustic altimeter. The sensors work together with each other and the cameras to help maintain safe flight.

Spiri can fly only 10 to 15 minutes between battery charges, depending on headwinds and other conditions. If that sounds lame, keep in mind that it’s longer than the AR.Drone, unless you add an extra-cost battery pack that extends flight to up to 18 minutes. Pleiades hopes to extend battery life, but in the meantime it’s mitigating this limitation by offering a free inductive charging station called the Perch. Spiri is programmed to return to its Perch when it needs to recharge, and users can extend range by purchasing additional Perch chargers and placing them along a defined route.

The quadrocopter is built with “strong-but-light protective ribbon” that encases the four rotors, built from reinforced carbon fiber, says Pleiades. It’s designed to land hard, but replacement parts will be available that are “easy to service and inexpensive to replace,” says the company. 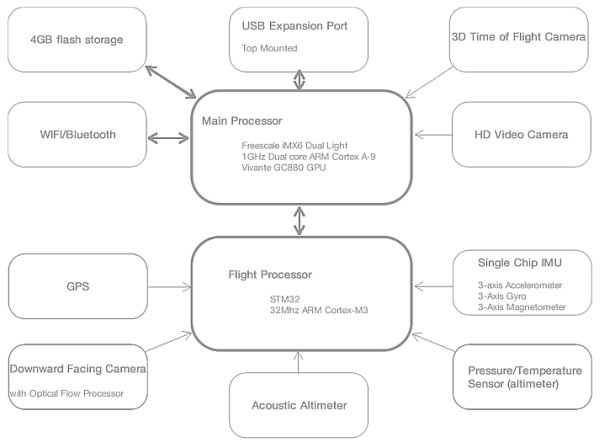 Spiri is not a fully open source platform, but rather “a proprietary hardware design with a mix of closed and open source software,” according to Pleiades. The company adds, “The lower level software, such as the stabilization control loop, is closed but much of the other software is open.”

Despite these limitations, Pleiades appears to be trying hard to make Spiri hacker friendly. The company will offer a free, detailed API for software and hardware makers, although it will require that developers sign a license agreement. “Certain projects” will be made open and public through GitHub, and there are plans for an applications service and store, says Pleiades.

The main objective of this project is to develop a speed-control system, for a DC motor, that alters voltages applied...