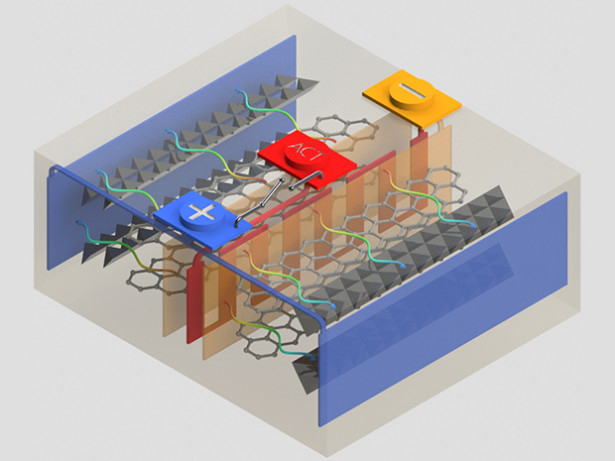 This advance might enable applications for which high-performance batteries are needed in extremely cold temperatures, such as electric cars in cold climates, high-altitude drones, and space exploration. EC Power is now creating all-climate battery cells in pilot-production volumes that can be put directly in vehicles, says study lead author Chao-Yang Wang, a mechanical and electrochemical engineer at Pennsylvania State University.

Lithium-ion batteries not only can suffer problems from overheating, but they also typically experience severe power loss at temperatures below zero degrees Celsius. The consequences of this weakness include slow charging in cold weather, limited regenerative braking, the need for larger, more expensive battery packs to start cold engines, and the reduction of vehicle cruise range by as much as 40 percent, researchers say.

Previous attempts to help lithium-ion batteries perform better at low temperatures have considered additives to the electrolytes that connect the electrodes of batteries. However, such additives can release gases at high temperatures that reduce battery life. Another strategy to keep batteries working in the cold involves externally insulating and heating the batteries, but external insulation and heaters make batteries larger and heavier, which is unwelcome in such applications as high-altitude drones where space and weight are concerns.

Now researchers have developed what they call an all-climate lithium-ion battery that can heat itself up from below freezing without the need for electrolyte additives or external heating devices.

The new device adds a 50-micrometer-wide sheet of nickel foil to its interior. This design allows the battery to divert electrical current through the foil at freezing temperatures to produce heat with about 90 percent energy efficiency. Once this heating effect raises the internal temperature of the battery above freezing, a switch is triggered, and the battery reverts to normal operations.

“A thin nickel foil ends the era of batteries not working at low temperatures,” Wang says. “Our project has been a multi-year effort and we went through many sophisticated ideas and synthesis techniques, but at the end we were surprised that a thin nickel foil works so well and involves minimal alterations.”

For instance, the researchers calculated their battery could provide 102 watt-hours per kilogram at -40° C, whereas batteries without the nickel foil could only yield 0.3 watt-hours per kilogram at that temperature. Similarly, they note their battery could five to six times more power at -30° C than batteries without the nickel foil.

“Batteries can be as robust as internal combustion engines at subzero temperatures from now on,” Wang says.

The scientists analyzed how their batteries degraded after they were repeatedly heated from -30 to zero degrees Celsius and then forced to cool again. They found that battery capacity faded less than 7.2 percent after 500 activations. They noted that in electric-vehicle applications, once the batteries are heated, cooling down usually takes up to 10 hours, so the batteries only need to be activated once per day. Assuming 30 days of extreme -30° C cold per year, 500 activations would amount to about 16 years of operation, which suggests that battery activations from freezing temperatures would not noticeably decrease battery life, the researchers say.