So this Lazy Old Geek (LOG) decided to buy a Raspberry Pi. Now the Pi itself is really small (see picture) but the first problem I found was that with the all the cables connected, it’s not very stable. The cables, especially my HDMI cable dominated where it was going to be. So the first thing I wanted was a more stable environment. Instead of a Raspberry case, I decided I wanted a little development platform for my Raspberry.

Well, I had a power supply that I stripped out of (I think) an old DVD player that didn’t work. It has 5Vdc and 12Vdc. I tested the 5Vdc and it seemed to have at least 2 amps current so should be adequate for my Raspberry Pi.

So I built a plastic case out of some clear Lexan to reduce shock hazard. I left the front open for ventilation.

Then I bolted my Raspberry Pi to the top piece of Lexan. (see picture)

Even with the Lexan, the Raspberry still shifts around so I usually tape it to the power supply box unless/until I come up with some kind of a latch.

Okay to eliminate the Ethernet cable, I bought a USB WiFi adapter. I already have a wireless network in my house.

Be careful when selecting an adapter as many will not work with the Raspberry unless you know how to set them up to work. This one said that it would work and it did. Here’s how I set mine up.

Plug it into USB.

I think I had to power up twice.

Adapter: wlan0 (should be displayed)

Probably have to Scan for networks.

Select: your own SSID: (EnGenius1)

Authentication: WPA2-Personal (PSK) (This is the protocol I use)

For keyboard and mouse, I already own a wireless Logitech set. I think mine is an MK320. It requires another USB port.(see picture)

The one I received is a little different than the picture. The one in the picture looks like it has a swivel mount. Mine is adjustable only up and down. (See picture)

So I have 12Vdc on my power supply so I hooked up a power cable to it for the car monitor display. I also had a set of RCA AV cables (see picture). So I plugged the yellow jack into the display yellow receptacle (AV1) and the other end into the Raspberry Pi video out. {The standard for these cables is yellow for video, red for right audio and white for left audio}

Then I turned on the power. NOTHING!!! Some of the sparse documentation said that with no video, there would be a blue background. But I had nothing. 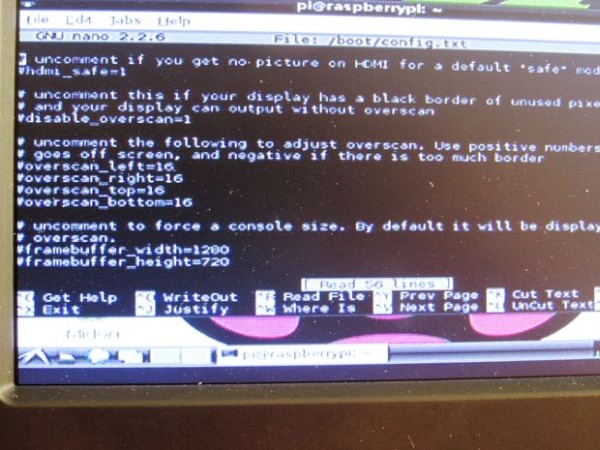 Well, I was about to complain to the seller but was playing around with it and some how hooked the display up to my DVD player. OOPs, it worked.

Okay, so I had to do some research on Raspberry Pi and video.

So the Raspberry Pi has a file called config.txt that contains information used to set up the video.

Okay, here’s a potential problem. Suppose I edit config.txt while using my Raspberry Pi with my HDMI monitor. Then it might not work with any video. Now the Raspberry Pi software is based on Linux. While I was able to get the NOOBS software loaded onto an SD card with Windows, I wouldn’t be able to edit it with Windows.

WARNING: There are a lot of websites that say you can easily edit Raspberry config.txt with Windows. Don’t believe them. I was not able to do this. When I plugged the SD into my Windows PC, I couldn’t even see the config.txt file. And I do not have a Linux PC. {And I hate Linux}

I found this website and loaded Win32DiskImager onto my Windows PC and tried it out.

This works mostly. It does take a long time.

WARNING: One of the problems I found is that SD cards of a certain size, e.g., 8gB are not really all the same size. Apparently, Win32DiskImager copies the whole SD, so if you’re trying to copy an image to an SD that is slightly smaller than the image, it will not work.

So I made a Raspberry Pi image for HDMI display, so I can remake an SD if mine doesn’t work.

Here is a pretty good description of config.txt for video.

If you’re in graphics mode, double click on LXTerminal

Most of this file is just descriptions of various options that can be used.

Any line that starts with a # means that it is just a comment. So in my config.txt you have to go down to the bottom to find the active stuff.

Comment out all active lines that start with hdmi

In my file I changed the following lines:

NOTE: I’m not sure if all of those lines need to be commented out or not.

Then I added the following:

NOTEs: The mode=2 is actually PAL which is Europe but my display says it will take NTSC or PAL. It works on both but PAL seems to be a little better for graphics.

The sdtv_colorburst doesn’t seem to affect readability so I didn’t use it.

All of the hdmi stuff doesn’t seem to affect my display.

So the only active lines in my config.txt are the following:

Then save the file

Then do a reboot

Warning: For those used to PCs, the Raspberry Pi takes a long time to start up. I think it’s even longer for RCA video as (I guess) it looks for an HDMI display first.

Now with this file, I can sort of read the text on my car display. On my display, the three buttons on the back are not identified. But with trial and error, the middle one is mode/select, the top is up and the bottom is down.

Pushing the middle one toggles through the setup options.

Well, I discovered that by adjusting the Brightness and Contrast, I was able to improve readability of the text to an acceptable level. Well, the pictures show some of the results.

Since I am OLD and my eyes aren’t the greatest, I don’t find readability to be adequate for creating projects but the car monitor could be useful for some projects.

After I got my car monitor working, I found this article from Adafruit:

As usual, Adafruit did a great job on this article. As a result I changed my config.txt by adding this:

I know it has been ages since I posted here so I thought I would put something up for Halloween. ...