Creoqode’s Lyra is a handheld game console featuring a 5 inch display surrounded by game controllers. It looks a bit like a PS Vita, but under the hood it’s powered by a Raspberry Pi Compute Module 3 Lite. That means while you can use the Lyra to play classic console games, it’s basically a full-fledged computer with support for Linux or Android operating systems. 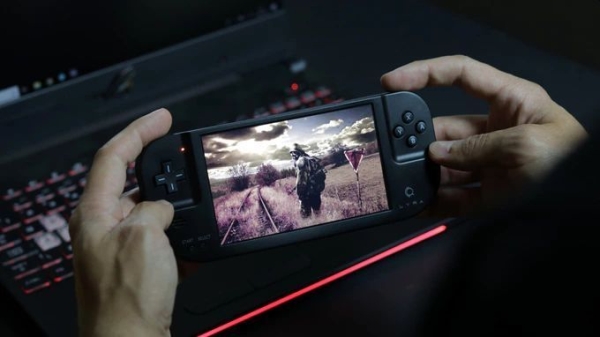 While the Lyra isn’t actually available for purchase yet, Creoqode is running a Kickstarter campaign and hopes to begin shipping the handheld computer in December. This is the company’s fifth crowdfunding campaign, so Creoqode has a track record of developing and delivering these sorts of products.

While you could theoretically save money by building your own Raspberry Pi-powered game system, there’s some value in getting all the components you need in one place.

It also features a Raspberry Pi module with a 1.4 GHz quad-core ARM Cortex-A53 processor and 1GB of RAM. And GPIO pads are exposed, allowing you to connect up to 8 sensors or accessories.

Creoqode notes that you can also also use the Lyra as a portable desktop computer — just plug in a mouse, keyboard, and display and you’ve got a Linux computer.

That said, now that the significantly more powerful Raspberry Pi 4 is available for $35 and up, I can’t help but think that it might have made sense for Creoqode to wait until a Compute Module version of Raspberry Pi’s latest single-board computer was available before launching the Lyra.

Meanwhile, folks who are willing to pay more for a higher-power handheld gaming PC have a growing number of options. In addition to the existing GPD Win and Win 2 handheld gaming computers with Windows 10 software, it’s looking increasingly likely that the Smach Z could actually ship this year.

Build Your Own Amazon Echo Using a RPI and ReSpeaker HAT