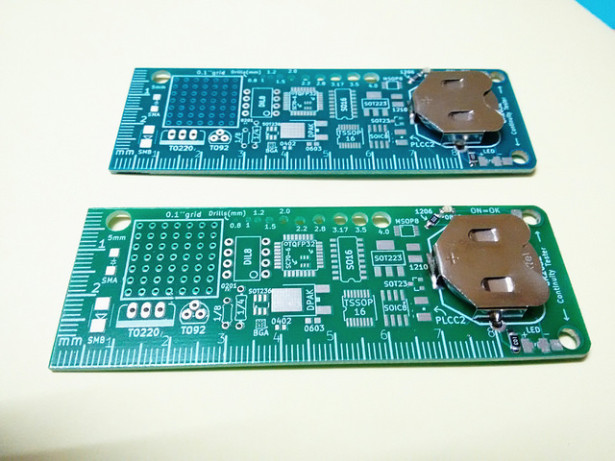 01 Jan 2016  Pune, India
It has been a while since i posted my Tinker Rule which i made during college days. I received a few requests for the ready to etch pdf which helped me gauge if this seemed to be useful to people. The response was somewhat positive and so, i decided to put in some extra effort and make it handy, portable and manufacturable !

My initial scale was big and not handy, So, this one should be small and compact and must not miss a single feature from its ancestor. This one has :

I made an initial to-scale mockup to verify the parts and ergonomics.

Then redesigned the board iteratively in KiCAD. The size was a bit higher to utilise the low volume PCB fabs from China.This presented an opportunity to search and try some local manufacturers and add a month to the project. Most of them unfortunately gave disappointing replies to mails for low volume production.

Aghasted, I started street searching for PCB manufacturers here in Pune. Fortunately, I live near an Industrial Area and Just Dial churned out a humble number of results. I visited a few of them and finalised one based on cost, quality and turn around time. But had to re-design it yet again to match the tolerances.

Here is what i managed to make :

The 5mm hole doubles up as a key-chain ring.

Use normal multimeter probes with the Maker’s Rule for continuity testing. My multimeter meter has a habit of dying down when i need it the most to check continuity of newly etched PCB. Here i use a 0805 LED for the output.

Raspberry Pi LCD: How to Setup a 16×2 LCD Display

In this tutorial I go through the steps on how to setup a Raspberry Pi LCD 16×2 display.  This is a...