For Technoport 2015 we were tasked to create an installation which would be displayed in the lobby at the event. Its main task would be to work as a gathering point and an ice-breaker for the attendees. We wanted it to look very good and at the same time have some technical features. With no specific requirements from Technoport themselves, it was mainly up to us to come up with something cool.

You can read about the finished project (and watch an awesome behind-the-scenes-movie) here.

The Mechanical and Physical design

We thought it would be nice if this installation resembled the technoport logo shown below.

This is a very cool logo to use as a design base for the installation. It is compiled of eight hexagons, arranged in an eight-way radially symmetric manner, and these hexagons overlap in both two and three layers.

We wanted LEDs to light up the installation through a layer of material on the front of the installation. This layer would have the pattern of the logo and form the “facade” of the installation. To layer the front as it is layered in the logo would be unnecessary complex, so we decided to flatten everything into one single plane. This facade layer would consist of 3 different types of pieces with 8 pieces per type, adding up to 24 pieces in total. These front pieces were quickly named “leaves”, as the whole logo kinda looks like a flower. With a small space between the leaves, one can clearly see the shape of the logo, even though none of the leaves are hexagons themselves. 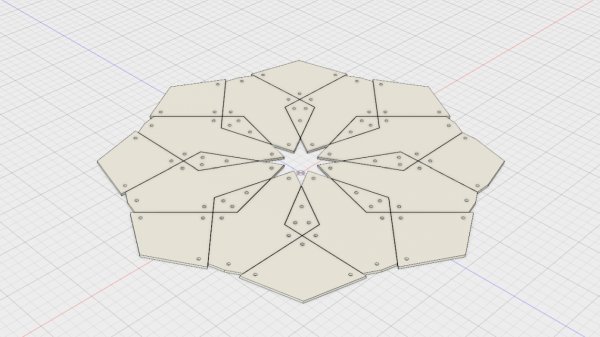 After looking at several types of materials for the leaves, we landed on using 5mm thick semi-opaque perspex plates. This material softened up the LEDs with just the right amount and ensured a soft, but still vibrant look in the end.

The facade layer would just be there for the looks and have no other functionality (except to be a mounting plate for the buttons, which will be discussed later). We needed something more rigid to hold everything in place and work as the main structure for the whole installation. For this purpose we decided to use a 4 mm aluminium plate, mounted 40 mm behind the leaves which later would be powder coated with a matte white paint. The shape of this main structure layer would be the same as the outline of the whole logo (and thus also the outline of the facade layer). 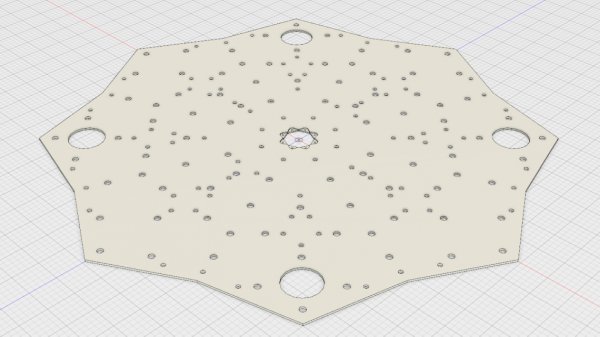 To fasten the leaves to the aluminum plate we used 80 M8 bolts and the same amount of (somewhat over-dimension) 40 mm steel spacers (20mm outer Ø) custom built in China. In retrospect, we could have used both thinner bolts and spacers.

Of course we needed a way to mount the installation as well, and the way we ensured that this was possible was to mount a smaller aluminum plate behind the previously mentioned one. This plate forms the far rear of the installation and its only purpose is to be something one can mount a large VESA mount onto. It is fastened to the larger aluminum plate with the same type of bolts and spacers as between the two front layers.