IoTSyS is an integration middleware for the Internet of Things. It provides a communication stack for embedded devices based on IPv6, Web services and oBIX to provide interoperable interfaces for smart objects. The IoTSyS middleware aims providing a gateway concept for existing sensor and actuator systems found in nowadays home and building automation systems (KNX, BACnet, ZigBee, Wireless M-Bus), a stack which can be deployed directly on embedded 6LoWPAN devices and further addresses security, discovery and scalability issues.

This connector extends IoTSyS by the M-Bus (Meter Bus) standard. Therefore, the API from the Wireless M-Bus has been altered to make the communication with the meters as easy as possible. To use this API in IoTSyS a M-Bus connector was created. As Raspberry Pi is be the a target platform for IoTSyS a piggy back board M-Bus-Master for a Raspberry Pi was created.

The M-Bus standard is defined in EN 13757-2 (physical and link layer) and EN 13757-3 (application layer). A detailed description is available at the official M-Bus homepage {1}.

The M-Bus was developed to fill the need for a system for the networking and remote reading of utility meters, for example to measure the consumption of gas or water in the home. This bus fulfills the special requirements of remotely powered or battery driven systems, including consumer utility meters. When interrogated, the meters deliver the data they have collected to a common master, which can, for example, be a hand-held computer, connected at periodic intervals to read all utility meters of a building. {1} 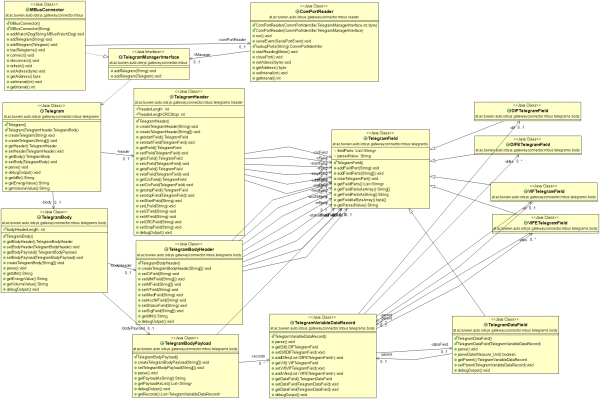 The M-Bus is a hierarchical system, with communication controlled by a master. The M-Bus consists of the master, a number of slaves (end-equipment meters) and a two-wire connecting cable. The slaves are connected in parallel to the transmission medium.

In order to realize an extensive bus network with low cost for the transmission medium, a two-wire cable was used together with serial data transfer. In order to allow remote powering of the slaves, the bits on the bus are represented as follows:

The transfer of bits from master to slave is accomplished by means of voltage level shifts. A logical “1” (Mark) corresponds to a nominal voltage of +36V at the output of the bus driver (repeater), which is a part of the master; when a logical “0” (Space) is sent, the repeater reduces the bus voltage by 12V to a nominal +24V at its output. Bits sent in the direction from slave to master are coded by modulating the current consumption of the slave. A logical “1” is represented by a constant (versus voltage, temperature and time) current of up to 1.5mA, and a logical “0” (Space) by an increased current drain requirement by the slave of additional 11-20mA. The mark state current can be used to power the interface and possibly the meter or sensor itself.

The physical layer makes certain demands on the data link layer. Besides half-duplex asynchronous serial transmission with data rates between 300 and 9600 Baud, these include the requirement that at least every eleventh bit should be a logical 1, and also that there should be a Master-Slave structure, since the slaves can not communicate with each other. The protocol of the data link layer is based on the international standard IEC 870-5, which defines the transmission protocols for telecontrol equipment and systems. The M-Bus protocol described below derives from the above standard, but doesn´t use all the IEC functions.

This protocol uses asynchronous serial bit transmission, in which the synchronization is implemented with start and stop bits for each character. There must be no pauses within a telegram, not even after a stop bit. Since quiescence on the line corresponds to a 1 (Mark), the start bit must be a Space, and the stop bit a Mark. In between the eight data bits and the even parity bit are transmitted, ensuring that at least every eleventh bit is a Mark. The bits of data are transmitted in ascending order, i.e. the bit with the lowest value (LSB = least significant bit) is the first one to be found on the line. The transmission takes place in half duplex and with a data rate of at least 300 Baud.

In the M-Bus specification there are three different telegram formats, which can be recognized by means of special start characters. In the table below the telegram formats used for the M-Bus will now be explained.

Single Character: This format consists of a single character, which the E5h (decimal 229), and serves to acknowledge receipt of transmissions.

Short Frame: This frame with a fixed length begins with the start character 10h, and besides the C and A fields includes the check sum (this is made up from the two last mentioned characters), and the stop character 16h.

Long Frame: With the long frame, after the start character 68h, the length field (L field) is first transmitted twice, followed by the start character once again. After this, there follow the function field (C field), the address field (A field) and the control information field (CI field). The L field gives the quantity of the user data inputs plus 3 (for C,A,CI). After the user data inputs, the check sum is transmitted, which is built up over the same area as the length field, and in conclusion the stop character 16h is transmitted.

Control Frame: The control sentence conforms to the long sentence without user data, with an L field from the contents of 3. The check sum is calculated at this point from the fields C, A and CI.

Meaning of the Fields

C Field: The following table shows the function codes used in the calling and the replying directions:

A Field: The address (A) field is used to address a slave in calling direction and to identify the sender of information in receiving direction. The addresses 1 to 250 can be allocated to the individual slaves, up to a maximum of 250. The address 0 is reserved for unconfigured slaves and the addresses 254 and 255 are used for broadcasts.

Check Sum: The Check Sum is used to recognize transmission and synchronization faults. The Check Sum is calculated from the arithmetical sum of the data mentioned above without taking carry digits into account.

SND_NKE → Single control character This procedure is used to start up after the interruption or beginning of communication. The slave responds to a correctly received SND_NKE with an acknowledgment using of a single character (E5h).

SND_UD → Single control character With this procedure the master sends user data to the slave. The slave can either confirm the correct receipt of data with a single character acknowledge (E5h), or by omitting a confirmation signal that it did not receive the telegram correctly.

REQ_UD2 → RSP_UD The master requests data from the slave according to Class 2. The slave can either transfer its data with RSP_UD, or give no response indicating that the REQ_UD2 telegram has not been received correctly or that the address contained in the REQ_UD2 telegram does not match.

The standardized application protocol is defined in the standard EN1434-3 for data exchange with heat meters. This standard is also suitable for other consumer utility meters, e.g. for gas and water. However, EN1434-3 only covers the data structure in the reply direction, the data structure generally used in the direction master to slave will be presented here.

The configuration of slaves is also defined in this layer, but won’t be described here, because M-Bus meters are only read with IoTSyS. The frame of the fixed data structure is shown in the following table:

The frame of the variable data structure is shown in the table below:

The first twelve bytes of the user data consist of a block with a fixed length and structure :

This may seem like it already exists, but I couldn't find it anywhere. So, I made it myself: a camera...