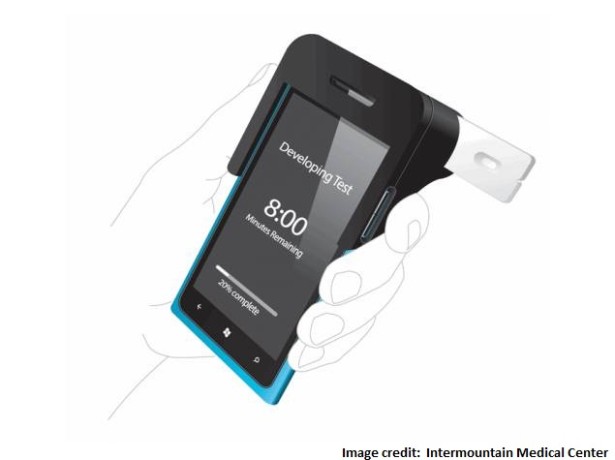 Researchers have developed a device that uses your smartphone to monitor your stress levels.

The device can use any smartphone to measure the cortisol concentration in saliva in less than 10 minutes, researchers said.

“We have developed a method for measuring cortisol in saliva using a smartphone and a disposable test strip. This innovation enables anyone with a smartphone to measure their salivary cortisol level quickly, accurately, and affordably,” said lead study author Joel R L Ehrenkranz, director of diabetes and endocrinology of the Department of Medicine at Intermountain Healthcare in Murray, Utah.

Cortisol is a hormone made by the adrenal glands that’s essential for the body’s response to stress, and measuring cortisol can help diagnose adrenal diseases and monitor stress levels.

Current testing for salivary cortisol levels involves collecting a saliva sample and sending it to a clinical lab for analysis.

“A lab charges about $25 to $50 for a quantitative salivary cortisol test and has a turnaround time of days to a week. This test, taken in a medical office or at home, will cost less than $5 and take less than 10 minutes,” Ehrenkranz said.

“The device is a reader that includes a case, a light pipe, and a lens and costs about a dollar to make. There is no battery power and it’s unbreakable, passive and reusable,” Ehrenkranz said.

Doctors worldwide can use the smartphone test to help them diagnose adrenal insufficiency and hypercortisolism and monitor physiologic variations in cortisol concentration; and individuals can monitor their own cortisol levels whenever they like, researchers said.

The person being tested inserts a straw-like saliva collector under the tongue. The collector wicks the saliva by capillary action to an immunoassay strip housed in a cassette and the cassette is inserted into the reader.

The smartphone uses its camera and flash to take a picture of the saliva-coated strip and an algorithm converts the image’s pixel density to a cortisol value.

The device was presented at ICE/ENDO 2014, the joint meeting of the International Society of Endocrinology and the Endocrine Society in Chicago.

Demo: https://wiaio.github.io/wia-location-tracker-example-web/ Project Requirements Node.js and NPM must be installed. How to install Node.js on a Raspberry Pi: http://blog.wia.io/installing-node-js-on-a-raspberry-pi-3 A...