MechaTracks has announced a CAT4 4G LTE HAT board for the Raspberry Pi called 4GPi. The 4GPi is the first commercially produced add-on board which enables CAT4 LTE connectivity for the Raspberry Pi, enabling 150Mbps download and 50Mbps upload speed. The 4GPi sells for ¥25000 JPY yen or €195 (about $222) and is over twice the cost of existing LTE add-on boards such as the Cat.M1 and NB-IoT compliant Sixfab Raspberry Pi Cellular IoT Application Shield, which is restricted to 375Kbps up and down. There are many 3G Raspberry Pi add-ons like Linkwave’s Pilot and MechaTracks’ own 3GPi. The 4GPi is designed around a SIMCOM SIM7600JC-H LTE Cat4 module. This enables LTE bands 1, 3, 8, 18, 19, and 26, that are usually employed across Europe, South America, and Japan, Korea, Thailand, India, Australia, and New Zealand. 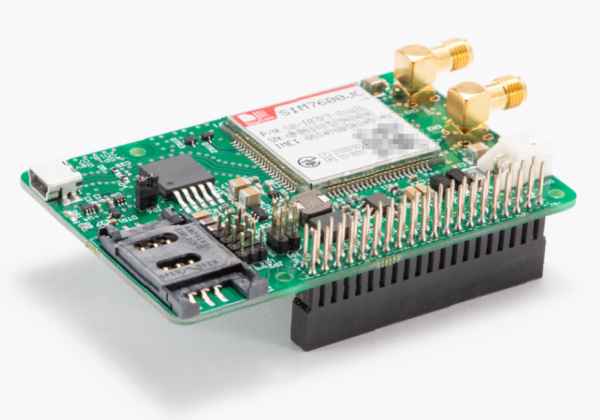 According to the chipset documents, this variant does not have fallback capabilities for UMTS / HSPA or GSM / GPRS / EDGE networks. A Raspbian image is available to make setup easy. The 4GPi is equipped with dual external antennas and appears to incorporate a micro-USB port. It supports any Raspberry Pi that has a 40-pin connector and includes passthrough pins and a jumper switch to enable other HATs to be used on the same Pi. For example, the board can work together with MechaTracks’ ADPi ADC board and RTC equipped SleePi power management board.

Sales of the 4GPi start on November 1, for ¥25000 JPY ($222 USD / €195 EUR). It is available from Amazon Japan (with international shipping possible), as well from RS Components and SwitchScience. While the price of 4GPi is a bit higher than that of the base Raspberry Pi board, the two combined, are still to a large extent more affordable than other LTE-connected development devices available in the market, making it a more suitable option for projects which require mobile network connectivity, particularly digital signage, security and asset tracking, and agricultural/environmental use cases, where constant Wi-Fi connection is unreliable and impractical.

At first glance, the Banana Pi BPI-M4 looks like a Raspberry Pi 3 clone. And it kind of is — the single-board...