Cabinet is made from 6mm mdf with 12mm mdf base. My own design inspired by full size cabs and other designs ive seen around.
Parts – Raspberry pi model B with 8gb sd running retropie 2.3
7″ lcd and control board removed from an old portable dvd
amplifier and speakers from old computer speakers
12V 3A power supply (lcd, amp, lights and fan run on 12v)
adjustable 3A switching regulator set at 5.2V for the pi 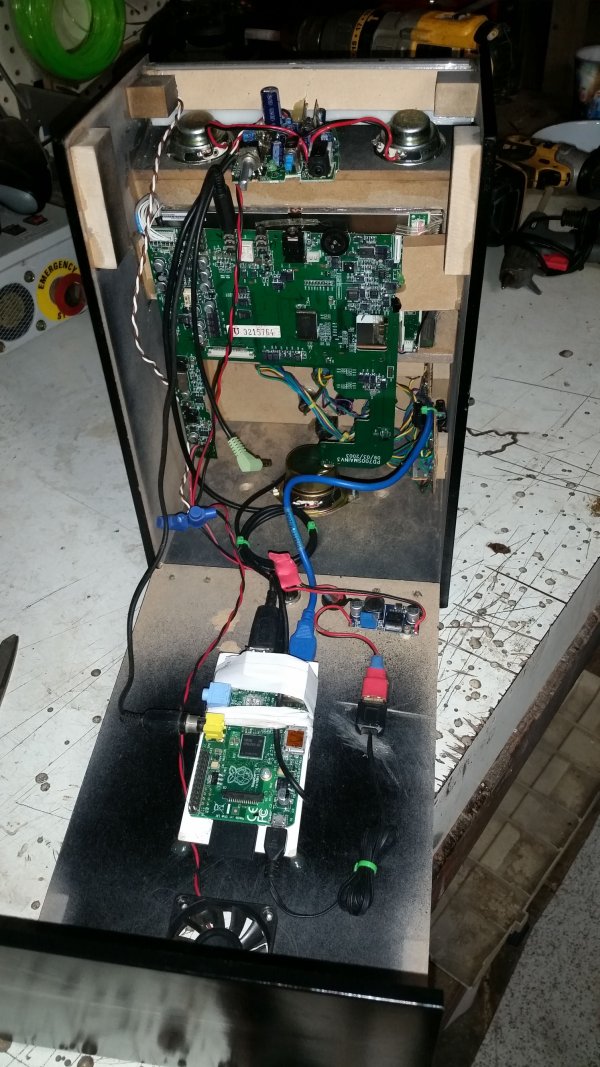 Did have a little accident the other week though, accidently shorted the usb pins to the 12v supply which in turn frizzled the usb/ethernet chip which after that the pi would not boot and the fuse and usb chip would get red hot.
So i have a new rpi model 2 on its way but in the mean time i thought i would try fix it.
With nothing to lose and discovering there was a short on the usb chip causing the psu to die, i went about removing the offending usb chip. All i did was cut the legs with a stanley knife then literally

chiselled the chip off the pcb with a screwdriver.
Desoldered the rest of the chips pins and cleaned up the pcb a little then plugged it in…
And I’ll be damned, it worked! So in went an sd card and it booted up fine, i couldn’t believe it!
now next problem was a lack of usb but after checking out the pi’s schematic, usb comes out of the cpu and straight to the usb hub chip and also goes to a pair of jumpers on the pcb (R36 and R37) which then goes to the bottom usb port.

Media Centers are useful tools that allow users to organize and play their media, including videos, music, and pictures. Media...