Maker Kaisar has shared some amazing mini Raspberry Pi robots he has created in the form of the Pica and Dot. Building on his previous tiny robots using the Raspberry Pi Zero computer first unveiled back in 2021 the latest creations are even smaller and getting smaller with every iteration. The Pica features a Pimoroni’s Tiny 2040 a development board powered by the Raspberry Pi Foundation RP2040 microcontroller chip. 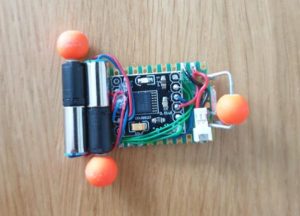 “Pica was born almost by accident. “I’d bought a few 6 mm geared motors about a year ago and, when I was sorting some parts on a Sunday morning, I found a Raspberry Pi Pico board and the motors were on the table at the same time,” Kaisar says. “Some combination of neurons fired in my brain and the idea of Pica was born.” This effort used two motors, a DRV8833 motor driver, and a 70 mAh lithium-polymer battery. It moved along on three 8 mm wooden beads acting as wheels. To make it as small as possible, Kaisar decided to saw away Raspberry Pi Pico’s lower section.”

““I just wanted to make a smaller version of Pica utilising the Tiny 2040 board,” he says. Given the Tiny 2040 is roughly the size of a postage stamp, he could confidently claim on social media to have made the smallest Raspberry Pi robot in the world. This was Dot.”

“The initial plan was to have the same DRV8833 motor driver and 6 mm motors,” he reveals. “But because of the much smaller size of the Tiny 2040, it was a little tricky to find room for the motor driver and still maintain the low profile and cuteness of the robot. Then I had the idea of measuring the motor current to see if they can be used without a motor driver.”

Security experts have called on Raspberry and Linux users to change default passwords on their machines as new data revealed...