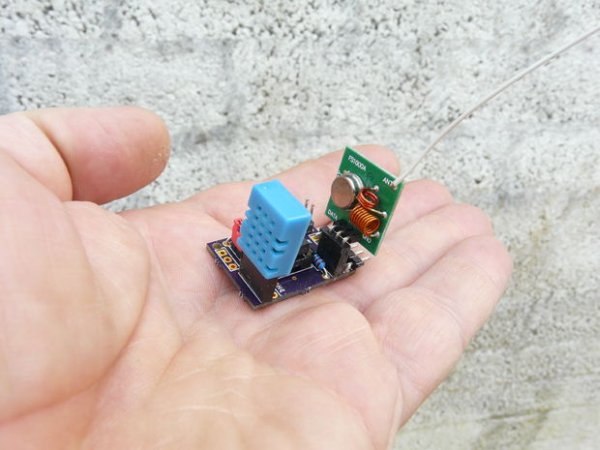 In a recent instructable Indigod0g described a mini weather station that works pretty well, using two Arduinos. Maybe not everyone wants to sacrifice 2 Arduinos to get humidity and temperature readings and I commented that it should be possible to do a similar function with two Attiny85’s. I guess talk is easy, so I better put my money where my mouth is.

In fact, if I combine two earlier instructables I wrote:

2-Wire LCD interface for Arduino or Attiny
and
Receiving and sending data between Attiny85 (Arduino IDE 1.06)
then most of the work is already done. Only need to adapt the software a bit.

I chose for a two wire lcd solution with a shift register, rather than an I2C LCD because on the Attiny the shift register is easier to implement than the I2C bus. However… if you for instance want to read a BMP180 or BMP085 pressure sensor, you need I2C for that anyway so you might as well use an I2C LCD then too. TinyWireM is a good library for I2C on an Attiny (but it requires extra space).

The display
74LS164 shift register
1N14148 diode
2x1k resistor
1x1k variable resistor
an LCD display 2x16The transmitter is a very basic configuration of the Attiny85 with a pull up resistor on the reset line.
A transmitter module is attached to digital pin ‘0’ and the DHT11 data pin attaches to digital pin 4.
Attach a wire of 17.2 cm as antenna (for a much better antenna see step 5).

Samsung gets serious about the IoT

We’re so excited to introduce ARTIK. The team has been working night and day, for many months, to build, test...