FriendlyElec has launched an upgraded miniature $20 “NanoPi Duo2” board that updates the original Duo with an Allwinner H3, Bluetooth, a camera connector, and an optional 2G carrier board.  NanoPi Duo2 has two 16-pin GPIO headers with breadboard pins in a dual-in-line layout. The Duo2 can be placed into an embedded design like a computer module or it can be plugged into a breadboard or optional carrier board.

The NanoPi Duo2 comes with an optional, $10 IoT-2G Application Carrier Board equipped with a 2G radio, which is specifically designed for the Duo2. The microSD slot and micro-USB OTG port make the Duo2 barely an SBC. The 55 x 25.4mm Duo2 is a bit larger on one end than the 50 x 25.4mm Duo. The extra space houses the new camera connector, which supports a ribbon cable connected to OV5640 based camera. 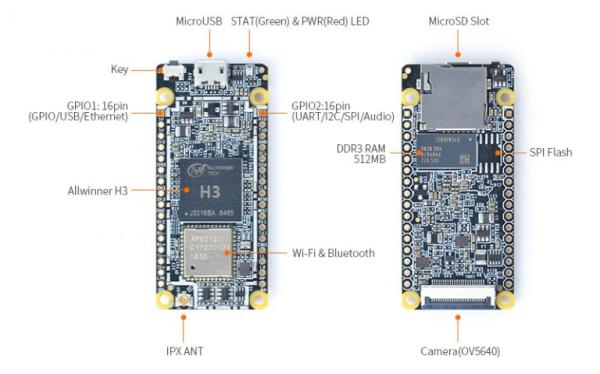 There’s an enhanced 802.11b/g/n wireless module, which adds Bluetooth 4.0. However, the Duo2 has a slim 20 to 70℃ operating range than the Duo. An IoT-2G Application Carrier Board, which is set to replace the Duo’s earlier ”Mini Shield” carrier is also available. It is said to be dedicated to the Duo2. The 85 x 56mm IoT-2G board is shaped like a Raspberry Pi board, but it’s restricted to dual USB 2.0 host ports. The board has a “SIM800C” quad-band, 2G GSM/GPRS module and microSIM slot, as well as a 2G antenna and dual 2G status LEDs. There’s also an IPX to SMA antenna converter for a WiFi antenna. The IoT-2G Application Carrier Board is fitted with a power-only micro-USB port and a 10/100 Ethernet port. There’s a debug UART, as well as audio, CVBS, UART, and I2C headers.

IoT Raspberry Pi security camera running OpenCV for object detection. The camera will send an email with an image of...