w, yes, the Raspberry Pi Computer, a credit card size mini PC that only cost $35. There are so many possibilities and uses for these small nano PCs. People have made them into PVRs (personal video recorders), retro gaming machines, weather stations, in-car PCs, jukeboxes, and so many more creative ideas. When I started this project four weeks ago, I just wanted to see if it was possible to make an ultra portable, mobile Raspberry Pi that you can take to-go. As I was building my Pi-to-Go I kept saying to myself, it would be cool if it had this, and then I would find a way to make it happen.

My mobile Raspberry Pi Computer is now complete and because this is an open source project I wanted to show you everything, including how to build one yourself. I will even provide links to the parts I needed to purchase and the 3D printer STL files to print your own case. So here we go!

Just a quick blurb about myself. I am the founder and CEO of Parts-People.com, Inc. which specializes exclusively in Dell Laptops; and specifically Dell replacement parts, Dell laptop repair, and Dell laptop refurbishing. So I have more than 10 years experience in repairing and building laptops. Okay, lets move on. 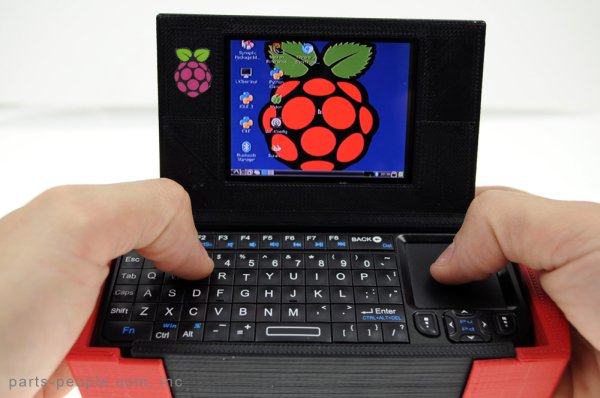 The LCD I used is from an after market backup camera system that can be installed in a car. The screen is a low resolution and I hope to find a better upgrade for my next version of the mobile RPi to-go. So for this proof of concept, it works just fine. The screen is 3.5″ using a 4:3 aspect ratio. It uses a composite input and is able to display a resolution of 640 x 480 pixels.

First off, be very careful when messing with lithium-ion batteries. Neither Parts-People.com, Inc nor I are responsible for any damages caused by this tutorial. Proceed at your own risk. Because I own a company that sells only laptop parts, it is only natural that I would use a laptop battery for this build. Laptop batteries are built in such a way that you cannot just plug something into them and use them for a battery pack. I knew it would be possible but I just needed to figure out the best way to get power out of it and how to charge it back up in the best and safest manner. I ended up using a battery for a Dell Latitude D600 laptop and just removed it from the Dell battery case. The battery was about the right size, it had the right voltage, and I had plenty of them. Those batteries have a standard Dell 9 pin battery connector. To get power out of this battery, you will need to connect pins 1,2, & 4 together for negative / ground (-) and pins 8 & 9 together for positive (+). Be sure to connect the correct leads. See picture for pin outs.

Charging the battery was easy, I just purchased an after market laptop battery charger. It connects directly to the battery’s 9 pin connector and also has a battery level indicator built-in.

One major problem with the Raspberry Pi is a lack of power. The RPi is powered by a micro USB 5v with at least 750ma, 1A is better. But the problem is not there, it is that the USB port can only supply in the neighborhood of 120ma per port, which is not enough to run much. So I found a super small 7 port USB hub that is powered and took it apart. I needed to power 5 things: a wireless WiFi dongle, a bluetooth dongle, an SSD hard drive, a keyboard/mouse transmitter, and the Raspberry Pi itself. The power from the battery pack is 11.1 volts and the power required for the USB hub was 5 volts. What I did was connect the battery to the LCD screen which had an input of 9v-13v, and I knew that the LCD screen would have some components that would require a 5v power source (LED LCD back light for example). All I had to do was find the onboard voltage regulator and solder on leads across the 5v capacitor and solder those to the 5v input on the powered USB hub. Easy as Pi. Now we have clean regulated power for all of our devices.

64GB SSD, yes I did! I wanted to add a linux swap partition because of the lack of RAM. The Raspberry Pi itself has 256MB (model B version 1) or 512MB (model B version 2). If I simply just installed a larger SD card and added a large swap file, or swap partition, I would eventually burn out the SD card. SD cards have a very limited number of read/writes and SD cards are slow. I opted for a 64GB Sata II solid state hard drive made by Samsung (model # MMBRE64GHDXP) and again I have a bunch of those in stock so it was convenient. I used an external USB hard drive caddy’s circuit board to connect the SSD sata HDD directly to the internal power USB hub. I setup a 1GB (1,024 MB) Linux swap partition, and have the rest formatted in ext4 for extended storage.

I wanted to build in as many features as possible, so I got a nano USB WiFi dongle and a nano USB bluetooth dongle to install inside the mobile Pi. These are also soldered directly to the built-in powered USB hub.

I’m using stock Raspbian Linux downloaded from raspberrypi.org. The only tweaks I made were to the config.txt file and added the Linux 1GB swap partition. I modified the config.txt file to make the LCD screen display properly and fill the whole screen.

I purchased a wireless 2.4Ghz USB keyboard & mouse combo. I would have preferred a wired USB but this one was the right size and price. The keyboard slides in and out via the access door on the left side of the machine. The access door also exposes the on/off switch and mini USB charge port for the keyboard too. 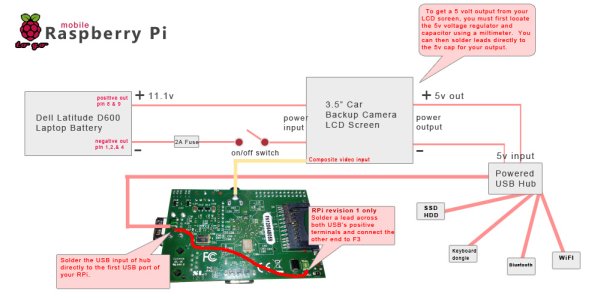 The Raspberry Pi board I am using is a model B (revision 1) but you can use the model B (version 2) for this build.