The Raspberrypi is called a mini-computer because the SoC has the powerful ARM11 processor which runs on 700 MHz at its core and having the peripherals like timers, interrupt controller, GPIO, PCM / I2S, DMA controller, I2C, SPI slave, PWM, UART, USB, graphical processing unit (GPU) which includes VideoCore, MPEG-2 and MPEG-4 and a 512 MB SDRAM. There is an Ethernet port which can be used to connect the board to a computer network. Those who don’t want to use a HDTV and separate keyboard and mouse for the Rspberrypi board can plug the board using a LAN cable to the Ethernet port of the PC and do remote access in TUI or GUI mode. 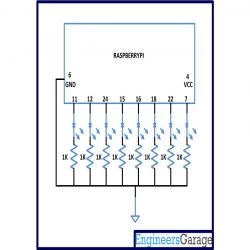 There are eight general purpose IO pins on the 13*2 pin connectors of the Raspberrypi board and to each one of them a LED is connected through 1K resistor. Separate code has been written to blink the LEDs individually and made them into executable files named blink2, blink3, blink4, blink5, blink6, blink7 and blink8. It is suggested to keep all the .c files and the executable files in a single folder for this particular project.

The user can run any of the LED blinking programs from the command line. For example to execute the file ‘blink1’, the user can use the following command;

I found these awesome Raspberry Pi pinout diagrams by Pighixxx at Flickr. When I am trying to learn something new,...