I created my first Raspberry Pi WebSDR receiver in the Fall 2014. I had long intended to setup a WebSDR station, but grad school and work can really keep you busy. The first receiver on the air worked well until a suprise electrical storm popped up while I was away at work and fried my poor little SoftRock. A replacement kit was ordered, built and on the air in less than a week.
I hope the wider ham community enjoys listening to my little WebSDR receiver or that it inspires others to build their own. I have also built a Raspberry Pi APRS iGate for the ISS and I’m working on a 20m WebSDR receiver as well as an amateur radio satellite tracker. Click here for a list of my other amateur radio related Raspberry Pi projects.

You can listen to this WebSDR here: http://n5dux.2y.net

Perhaps the most asked question other than what sound card I’m using (see above) is how to get the drivers for the Wolfson to work. After several nights of trying to cross compile the drivers for my Pi’s kernel, I decided to use the “official” Wolfson OS image. 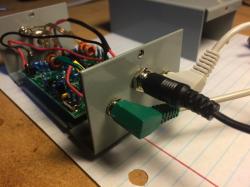 To initiate the Wolfson sound card and launch WebSDR, I created the following script:

My shack is detached from my house and I do not (at present) have wired network capability in the shack. Consequently I have my Pi connected to my home cable internet connection via wireless. My home router passes webtraffic to the Pi. I use DynDNS to give me a domain name that is easy to remember (n5dux.2y.net). When my ISP changes my IP address, the router informs DynDNS of the switch and traffic is directed to my new ISP.
At present, I have the Raspberry Pi WebSDR client restricted to 4 concurrent users. The reason for this is two-fold. 1) Not to overload the scarce system resources of a Raspi 2) Not overload my internet connection upload to the point I can no longer watch movies, play games or use my internet connection for my every day silliness and nonsense.

I hope to tweak/modify my setup in the future. A couple ideas I have:

Here is the PowerPoint presentation I used when I presenting this project at HamCom 2015 and the Shreveport Hamfest 2015.