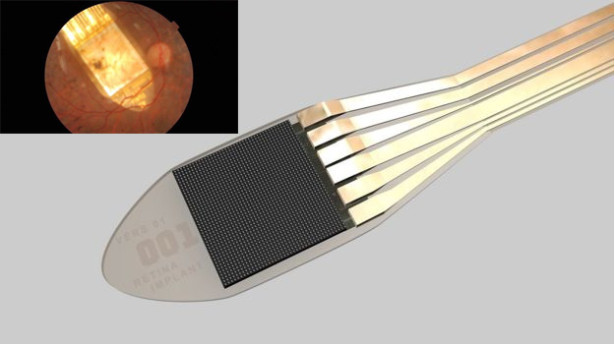 What if you could cure blindness as easily as turning on the lights? That’s what one doctor and his team are hoping to achieve with a clinical trial that uses a new form of retina implant to return sight to patients who have  lost the ability to see.

And for one of the six patients, it’s been a pretty incredible journey. Rhian Lewis was just a toddler when her parents noticed she had trouble seeing in the dark. Doctors discovered Lewis suffered from Retinitis Pigmentosa, a degenerative disease that would ultimately cause her to completely lose sight in her right eye, and most of it in her left. For the last 16 years, Lewis has been mostly blind.

The team, based out of Oxford Eye Hospital in England are using an analog chip that is placed behind the retina and acts as a replacement for the retinal cells that have been damaged due to disease. It’s then hooked up to a microcomputer that is implanted in the skin behind  the ear. That tiny processor sends signals to the optic nerve, which is then read by the brain, and basically turns the vision on in the brain like a tiny camera.

In Lewis’ case, after just two days of tests, she was able to make out basic shapes and see outside for the first time in over a decade.

It helped that in her case, Lewis’ optic nerve was still intact. But it still took some time for her brain to adjust to actually seeing for the first time in years. The first test was to see blinking lights on a computer screen, which she passed with ease. But when it came to discerning a white plate on a black table cloth, not so much. Trying to not feel overly defeated, Lewis came back the next day and was able to make out the shape, and more.

Her doctor, Professor Robert McLaren, then took her outside. Light and shadows, trees and cars. A silver car. Lewis was able to distinguish these things, and she was elated, “Being out in the real world, actually out in the street, you know, is far more useful, than locating flashes on a computer screen and doing the things in the lab.”

While this is McLaren’s first run of tests on the Alpha IMS Retina Implant, this isn’t the first trial. The developers of the chip, German based Retina Implant, concluded a study in 2014 in which 26 patients had the subretinal chip implanted and showed marked improvement in their vision. 80% were able to distinguish light, while 54% had the ability to make out shapes.

For a chip that has the resolution of 1-percent of a megapixel, it’s not all that powerful. But when you hook it up to the human brain, which is capable of an immense amount of power, the results are spectacular. And when that’s not enough, the users have the ability to control the sensitivity of the chip, up the contrast and adjust the frequency settings with a simple dial.

For More Details: A new form of retina implant returns sight to the blind