These days smartphones devices have tremendous computing power, and can do virtually everything an actual computer can do. When we are at work, we mostly use our laptops and desktops, but outside the work environment, we mostly our smartphones. However, due to the fact that our smartphones have small screens and lack of keyboard, we still stick so much to our laptops and desktops. There has been various attempts to make lapdocks and laptop shells over the years, with varying degrees of success. However, the team behind 2016’s NexDock is back with a sequel on Kickstarter, called the NexDock 2. 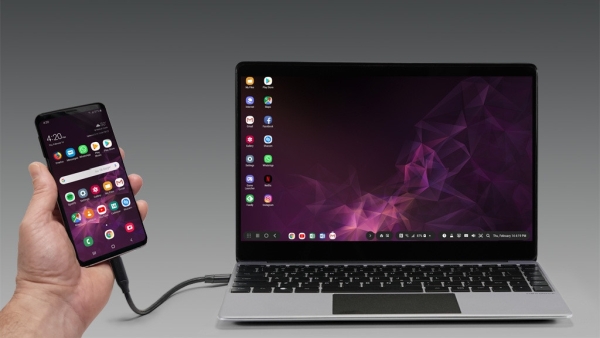 The new NexDock 2 offers you a large screen, and a keyboard which turns your smartphone into a laptop. Launched recently on Kickstarter, the NexDock 2 has already reached nearly triple its funding goal. The NexDock 2 is designed like an ultra-portable laptop, but without a processor, RAM, or hard drive. It comprises of just a screen, keyboard, and battery housed within the laptop. When a smartphone is plugged into the NexDock 2, the laptop utilizes the processor of the smartphone for all of the computing work. For now, the NexDock 2 can only work with smartphones that have a “Desktop Mode,” which is only available on Samsungand Huawei devices, but we hope to see this feature implemented by other smartphones manufacturers in the future.

NexDock 2 is not only compatible with smartphones, but also with single-board computers like the Raspberry Pi. There are plans also, to potentially develop “Compute Sticks” that turn the NexDock 2 into a laptop. The 13.3 screen of the NexDock 2 is a IPS LCD with a full-HD resolution of 1920×1080. The keyboard has a full QWERTY layout, with a multi-touch trackpad. For audio output feature, there are four 1W speakers. Available also are the standard USB, HDMI, and headphone jacks. The first NexDock, on the other hand, delivered a 768p TN panel, a mini-HDMI port, and full-sized USB ports only. The NexDock 2 comes with a 38 Wh battery, but the battery life span isn’t specified. It weighs 1420g, and 15.9mm in thickness.

Read more: NEXDOCK 2 TRANSFORMS YOUR SMARTPHONE INTO A LAPTOP

ON Semiconductor, driving energy efficient innovations, continues to enable battery-less and maintenance-free IoT with the introduction of its RSL10 Multi-Sensor...