Because this is MY spot. Find yours…

Just kidding! All I want to do is to experiment with OpenCV in Raspberry Pi and make it an IOT device. I’ve seen a lot of Face Detection algorithms and I found out that there are also other experiments. I found one that can do Car Detection. 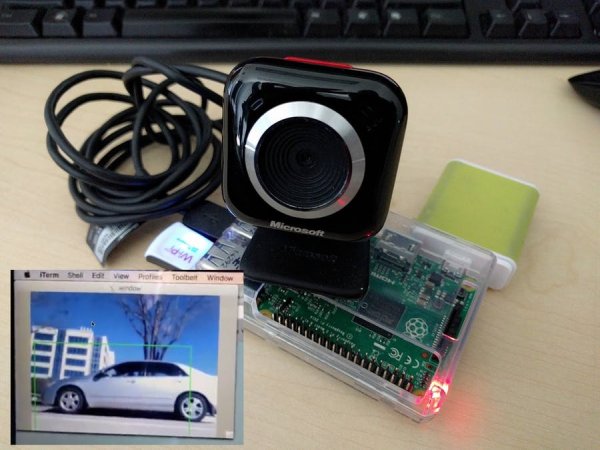 Traffic Flow is the study of interactions between vehicles, drivers, pedestrians, cyclists, other travelers and infrastructure (including highways, signage, and traffic control devices), with the aim of understanding and developing an optimal road network with efficient movement of trafficand minimal traffic congestion problems. (From Wikipedia)

But I want something that I can apply to my daily life.. so get off my parking lot… Move along.

And so the journey starts….

In this project we explore a car counter device using:

the best thing here is – it will cost you less than $50 dollars.

IMPORTANT: This Project only works on Raspberry Pi Wheezy distribution.

The instructions here will not work on latest version of Raspberry Pi.

You can download last Wheezy version of Raspbian using this link

Installing NodeJS is not a big deal in Raspberry Pi, but make sure you have the latest version. I followed this from installing Johnny-Five

I installed OpenCV by following this

Make sure you do this before you go to bed because it will take a lot of hours to compile it. Like 9.5 hours or so.

Make sure you install version 2.4, I install OpenCV 3.0 at first and found out that CylonJS uses OpenCV 2.4, so I had to do it twice!

I followed how to install it in Ubuntu even though we’re installing this in a Raspbian. Make sure ffmpeg is installed.

If you’re having issues with installing cylon-opencv in Raspbian Wheezy, try to install the stable version of NodeJS 4.2.3

I followed the instructions here but I made sure I download the correct version.

and also run these commands

If you want to remotely view the camera, you can use and install

I named the Thing as carcounter.

The sample app is very helpful. Here’s the link

For more detail: Nobody Parks Here!