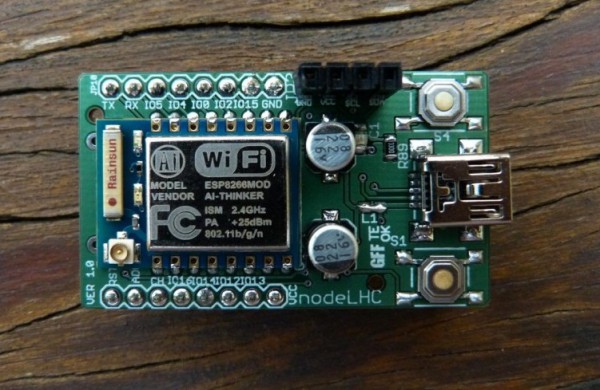 During the weekly IoT workshops at the LHC , we saw that some development boards using the ESP8266 were emerging, such as nodeMCU and ESP-201, but we decided to create our own board, meeting our needs. Then came the nodeLHC!

The main reason for creating the board was that most people who were participating in the workshops did not have much experience with electronics and were having difficulties connecting the modules. With that, we saw that the best thing would be to develop a board that is as simple to use as an Arduino and doesn’t have to use any external electronics, with the exception of peripherals and sensors that may be used with nodeLHC.

The electrical and PCB design was done and discussed during the workshops. The first plates were also assembled at the LHC.

One of the advantages of this board is its size, which you can place on the breadboard without problems, in addition to the USB-Serial converter on the board itself, so there is no need to connect an external adapter.

We are not selling the board or the development kit, as we have no way of making production possible. But we do not rule out the possibility of one day opening for sales.

Get rid of unpleasant odors easily and effectively