Have you ever heard of an audio amplifier operating in Class-DG?

Neither had I until I came across an unusual amplifier from Maxim, that slipped below Electronics Weekly’s radar when it first came out.

Class-D audio amplifiers (switching audio amplifiers) have done a lot to increase efficiency and cut heat compared with traditional analogue Class-AB amplifiers, without sacrificing much audio quality when it is done correctly.

However, as power output drops, switching losses start to dominate, which is why amplifiers aimed at 32Ω headphones are still analogue.

While they are analogue, the latest headphone amplifiers are analogue with a twist: the amplifier is Class-AB, but they get their power from a two-level voltage source which will be at the higher level for sonic peaks and the lower level for quieter passages. 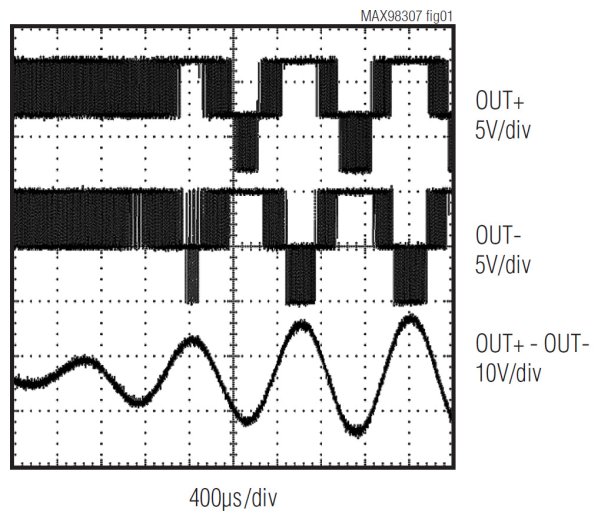 This sort of power-saving operation is called Class-G – and has even been used in some large amplifiers. Some of Bob Carver’s 1980s ‘Cube’ amplifiers used Class-G operation as a heat-reduction strategy to deliver over 200W from cases far smaller than many thought possible at the time.

In a rather left-field move, Maxim has combined Class-D switching amplification with Class-G-style rail switching and come up with Class-DG operation, implemented in its MAX98308 3.3W (from 5V into 8Ω+68µH) mono audio amplifier.

To get the power, it has differential outputs to double potential output swing, and a charge pump that can generate a negative rail when more than 0-5V of output excursion is needed.

Multi-level output modulation is employed in to draw maximum power from the lower impedance positive battery rail, rather than the higher impedance charge-pump-generated negative rail.

“When the negative rail is not needed, the output is drawn entirely from the standard supply. This scheme results in high efficiency over a wide output power range,” said Maxim. Better than 80% efficiency is claimed from 350mW to 2.2W output.

This is a very small chip: a 1.7×1.3mm 12bump wafer-level package (WLP) needing only 4.7 and 10µF capacitors (the external resistor version is in a larger 16pin TQFN).

We wanted to create an arcade cabinet as a fun project for the kids at our (Coventry) Makerspace, as a...