The trend for making cyberdecks has seen the Raspberry Pi emerge as a favourite for these home-made computer workstations, with the all-in-one Raspberry Pi 400 providing a particularly handy shortcut to integrating the computer and keyboard components. There’s still the question of the cyberdeck chassis and screen though, and it’s one that [bobricius] has answered in what may be the simplest manner possible, by means of a riser PCB from the expansion port holding a 320×240 SPI display. 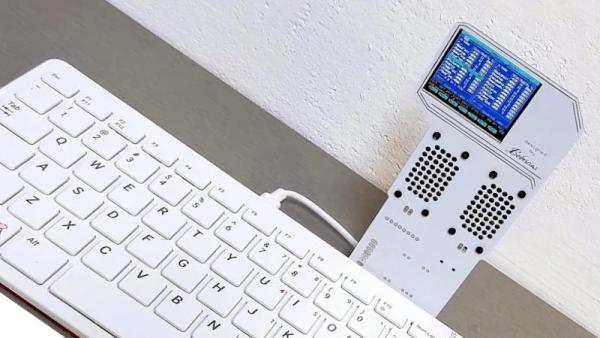 If this is starting to look familiar, then you’d be right to recognise it as a slightly higher-quality version of those cheap LCD screens that have been available for the Pi for quite a few years. Alongside the screen is a pair of speakers, and the whole thing extends upwards from the back of the Pi 400. We’d question how much load can be taken by the expansion connector, but in practice it seems not to be taking too much.

The device in use can be seen in the video below the break. It’s definitely not the largest of displays, and when used as a desktop, it’s rather cramped, but it seems adequate for a terminal. It has the advantage over many cyberdecks that when the novelty has waned, it can be removed, and the Pi 400 used with a conventional display.

The Pi 400 has been with us for nearly a couple of years now, and perhaps hasn’t had the recognition it deserves. If you’ve never tried one, take a look at our review from when it came out.

In the long tradition of fortune telling Magic 8 Balls I created a self-contained Magic 2 Ball running a Raspberry...