The Rockchip RK3399 has revolutionized the open-spec single-board computer world. Hardkernel’s new Odroid project has made the multi-core SoC RK3399 to firm it’s grip further. Recently Hardkernel released images, specs, and extensive benchmarks on a prototype for its storage-oriented new Odroid-N1 board. The boards can be expected to launch for about $110 in May or June this year. 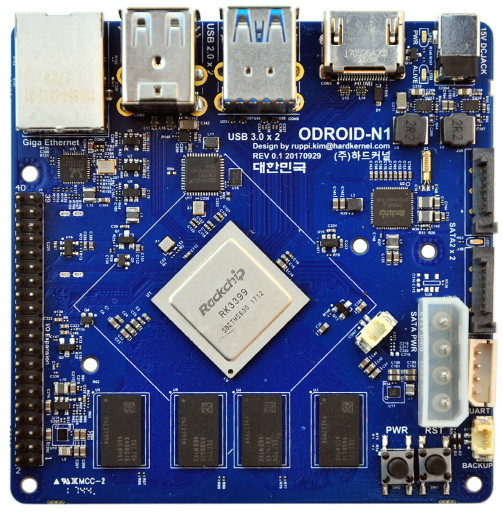 The 90x90x20mm SBC is highlighted for offering dual channel SATA III interfaces and 4GB DDR3-1866 dual-channel RAM. The Odroid-N1 can run Android 7.1, as well as Ubuntu 18.04 or Debian 9 with Linux Kernel 4.4 LTS. This new board can also be open source as its previous flagship Odroid-XU4.

The RK3399 features two Cortex-A72 cores that are clocked at up to 2.0GHz, as well as four Cortex-A53 cores, which are clocked at 1.5GHz. (Some other RK3399 boards have listed 1.42GHz.) This board also includes a high-end ARM Mali-T864 GPU. Hardkernel’s benchmarks have shown the hexa-core RK3399 based Odroid-N1 is running significantly faster on most tests, beating the Odroid-XU4’s octa-core (4x Cortex-A15, 4x -A7).